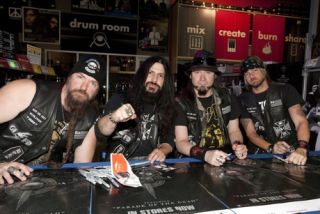 Why Tommy? "Shout At The Devil changed my life. That was when I decided this was what I wanted to do."

The Must-Own Album: "A big game changer for me was the Mötley Crüe record that nobody bought, which is the one with John Corabi singing on it. That's the drum bible. It changed the game in terms of being explosive when you play. He really went for it. It was a life changer for me, I really fell in love with that and it's been my bible since it came out."

The Classic Beats: "'Power To The Music', 'Uncle Jack', 'Hooligan's Holiday'. Those three right there are sick. 'Dropping Like Flies' is another with a really funky groove. There's a lot of cool stuff on there. You could tell he was starting to branch out into loving all different kinds of rhythm and he was embracing that. And now he's into all of this electronic stuff which is really cool.

"I finally got to play with Tommy and sit down and ask, 'What made you think of that?' Tommy's my boy, I love that guy. I actually played with Mötley in London and Manchester [in 2007]. That was while I was a break from Evanescence. I just happened to be in London for four days on a break and Tommy called me and said, 'I need you to play tonight!'"

Black Label Society's Order of the Black and Methods of Mayhem's A Public Disservice Announcement are out now.