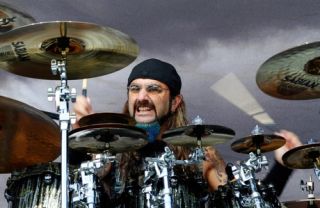 Mike Portnoy has spoken about his three projects for 2012.

The drum icon told GuitarWorld.com that next year will see him work with Adrenaline Mob as well as projects with former Thin Lizzy mainman John Sykes and Deep Purple's Steve Morse.

On the differences between Dream Theater and Adrenaline Mob, Portnoy said: "The thing is about restraint, and playing what's best for the groove of the song, and I'm down with that. I'm totally cool with that. I played with Dream Theater, and so far that's been everything I'm about. This is far from what I'm about, and I'm about many, many different things.

"I could be just as happy playing a Beatles song as I am when I'm thrashing out the double-bass stuff with Adrenaline Mob. The stuff I'm playing with Adrenaline Mob is all about the energy and the song. It's about groove and riff-oriented songs. So, if anything, I have to show some restraint and make sure I play what's best for the song."