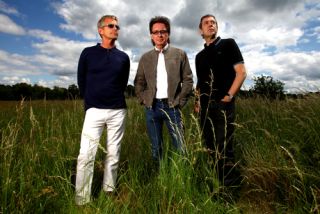 "Bruce Foxton's style of bass playing is very unique. He's one of Britain's great bass players," says Mark Brzezicki. The busy drummer first worked with The Jam's influential bassist in The Casbah Club and for the last two years has been a member of From The Jam with Foxton and vocalist/guitarist Russell Hastings.

Now the trio is gearing up to promote the release of Bruce Foxton's new album Back In The Room. The band, along with producer Charles Rees, recorded at Paul Weller's Black Barn Studio and the Modfather lent his talents to the proceedings. "Paul Weller is playing on four songs - guitar, piano, flute - so it's a great sounding record," says Mark. "They're well written classics, very radio friendly and have the classic sound you would expect from Bruce."

Paul Weller is not the only famous name to make a guest appearance on the album. "Steve Cropper plays on one song with us," says Mark. "We sent him the music, he played it in America and sent it back. He sounds wonderful on the song. His blues style guitar playing is amazing. We got Steve Norman from Spandau Ballet playing some sax with us. It's really good."

The actual recording of the drums was spread over several months as material was continually being written and tested out. "What we didn't do was bang all the drum tracks down in one day," explains Mark. "We did one or two drum tracks and got the songs semi-completed and then we were away touring. It was a quick album in studio time and hours but we did it over a period of eight or nine months. In all, it was probably only a month's worth of work or less. We weren't in a big rush. As songs were developing, when we were out with From The Jam, we'd run them up live. That was really good to test the water."

Mark, Bruce and Russell will be touring to plug the release. "We're talking about going out in February next year under Bruce's name and playing the album in its entirety," says Mark. "Likewise we're going out with From The Jam doing the album In The City to celebrate the 35th anniversary of that."

Back In The Room comes out on 1 October.