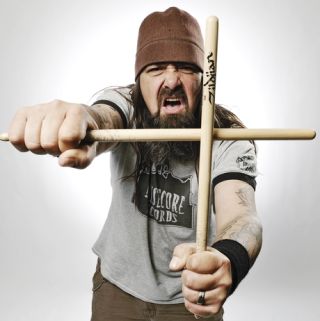 Down drummer Jimmy Bower is currently holed up in the studio with the heavy as hell metallers, but he found time to tell us all about what the band has in store. Head inside to see what we had to say.

"We just finished two or three weeks of writing, we've got seven songs and we're doing EPs. We've got seven and of those we'll pick about five," Jimmy told us.

He revealed that while he's been sworn to secrecy about the exact details of Down's foray into the studio, the material has enough spark to have urged him to get back into the rehearsal room.

He said: "I've been practising a lot more lately, which I never used to do. I feel really confident about getting in the studio this time around and I'm really excited about what I'm going to play. I'm going to try and piece something together really cool."

But, don't fret Bower fans, he isn't looking to reinvent himself. "I'm 42-years-old, I'm not going to drastically change my style or anything, but its more of a stamina thing. Just trying to hit as hard as I can but stay behind the beat and right in the pocket."

Jimmy concluded: "We start recording 1 August with drum tracks and we hope to release the record before the end of the year and come back to the UK for some touring. We love the UK, they understand us, we understand the UK."