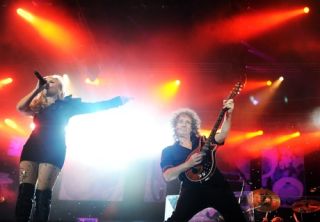 Landing a theatre tour playing tunes originally played by the likes of Roger Taylor and Taylor Hawkins comes with a hefty dollop of pressure. Add in that the tour is with West End superstar turned pop rocker Kerry Ellis and Queen hero Brian May and that cranks things up higher. Factor in that the drummer in question is Roger Taylor's son and we reckon it's a wonder the poor bloke hasn't keeled over from the stress of it all.

To our surprise Rufus Taylor seems to be taking the whole thing in his stride. The drummer has been picking up a steady flow of higher and higher profile gigs over the last few years, and when he took some time out of his ever-growing schedule we couldn't wait to find out all about the Anthems tour with Ellis, May and co.

How did working with Kerry first come about?

"In 2008 Brian asked me if I would like to do their version of 'Defying Gravity' at the Royal Variety Performance with him and Kerry. I was obviously a bit taken a back by the offer, but had to do it as it was an amazing opportunity for me. When I first heard it was actually Taylor Hawkins who came up with the original drum track to their version, this was a bit daunting as he is one of my main influences but I just listened to it religiously and it turned out great in the end."

What attracted you to the gig?

"From a drummer's point of view a lot of the music is straight and very heavy in most parts, which is always fun for a drummer! Its great to play with such a great band and Kerry's voice is always nice to hear, with an incredible range."

What are your highlights from the show?

"My three main highlights would probably have to be 'Defying Gravity' because its fast and Taylor did the original so its nice to copy him. 'Tie Your Mother Down' because I haven't done the original yet but it's a lot of fun to practice with and finally 'You Have To Be There' because it's heavy and just a good song for me to have a little fun with. They're all good to play though!"

Does your background and the fact Brian May is up there with you add any extra pressure for you personally?

"Obviously there is a lot of pressure anyway as they're big gigs and you just want to get it right every time without nerves coming into it, but they always creep up on you somehow! The fact that Brian's with us is great because he definitely helps with the nerves off the stage and on stage he's just so amazing to play with and I feel very lucky to be doing it. The best way to deal with it is to just concentrate on what I'm doing and nothing else!"

What kit/set-up will you be using on the tour?

"I will be using a seven-piece black DW kit which is brand new and I haven't had a chance to properly use it yet as I've been busy working away this year.So that's also very exciting for me, can't wait!"

"I'm currently playing kit on the We Will Rock You musical tour 2011, we started in November and finish around February next year! So that's keeping me very busy. I was also very fortunate to get asked to play at a large charity event called Wintershall with Jeff Beck. I nearly passed out when I heard!"

For full details of the Kerry Ellis tour visit www.kerryellis.co.uk.