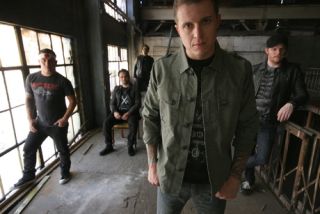 2010 was another storming year for Atreyu. The metalcore masters put out a stunning EP and toured their balls off, with a handful of UK dates seeing them out of 2010 and into 2011. Drummer Brandon Saller somehow managed to find some time to let us in on what this year has in store for the metalcore masters.

"We're going to take a little bit of time off and just hang out for a while and take a little break. We've toured strong for 11 years now so we'll take some time before our next record and do it right."

You've got a new project on the go as well, haven't you?

"I've got a new band I'm going to be getting started called the Black Cloud Collective. Early 2011 we'll have a release and tours etc."

Atreyu's last release was an EP of covers, how did that come about?

"We were doing a headline tour and we wanted something new for the fans to have. We've always done covers and had a lot of fun doing covers. It turned out cool."

Covers included tracks by Thin Lizzy and Aerosmith, were these key influences for you growing up?

"They're bands we all grew up on when we were younger and then a Volbeat are a band that we're all into at the moment."

Did you stay faithful to the originals?

"We always try to do a little something to it. We try to take it on and make it our own because no one wants to hear the same thing again. We'd finished the whole thing in maybe a week."

What gear did you use?

"We all used the same kit. That was kinda cool. Everyone played on the same gear - guitars and drums. That record came together sounding cohesive and not a mix-match of everything. It was an old vintage Ludwig Vistalite kit. It sounded f***ing awesome. I'd never used an acrylic kit before in the studio. It sounded great."