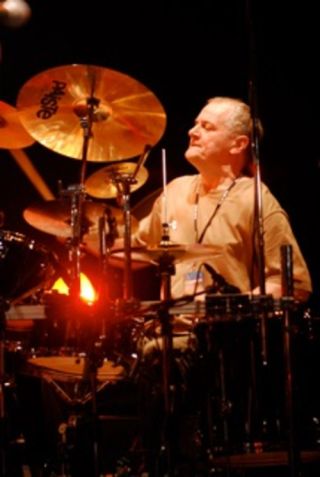 Pick up the brand new issue of Rhythm and you'll find Jon Hiseman talking all about his illustrious career behind the kit. Jon has chronicled his extensive experiences with the likes of Colosseum, Tempest and many more in his memoir Playing The Band.

Here's our second of five excerpts from the book for you to enjoy.

Towards the end of their holiday, he and Barbara spent the day sightseeing in Rome. Jon was a serious student of Roman history and had spent much of his spare time on the road reading up on the subject: "We were on the high point of the Forum overlooking the Senate House on the left and the Colosseum on the right. I had my head in my hands, Barbara leaning on the rail next to me, shaded by the cypress trees behind us. It was a very hot day. I turned to Barbara and said: "I'm leaving John Mayall. I'm going back to London and I'm going to form a band and call it Jon Hiseman's Colosseum." Her reply was typical: "Go for it!" The name had come to him almost as he spoke and he also had very definite ideas of who he wanted with him in the band, so on his return he immediately set about gathering the clan. Mayall soon got wind of Jon's plans on the grapevine and phoned him: "I hear you're leaving us," he laughed. Jon never forgot that royal 'us', but at least there was no acrimony from the ever-gracious Mayall.