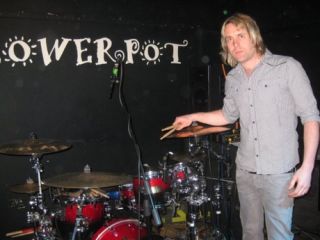 Despite perhaps being most well known in recent years for his stint behind the kit for Justin Hawkins' post-Darkness project Hot Leg, Darby Todd has a rich blues heritage.

Having made his name early on with a succession of blues gigs, including those with renowned UK blue-masters Papa George and Bobby Tench, Darby has since built on this grounding by playing shows with Gary Moore and linking up with Texan axe-master Buddy Whittington.

This, coupled with spells playing rock, jazz, funk, soul and even West End shows, means he's well-placed to give us the lowdown on blues playing, how the style differs from other genres and the tips and tricks up-and-coming blues drummers should learn.

How did you get your first blues gig?

"When I was about ten years old I was forced to go to someone's 40th birthday party and the band playing there was Papa George, who is a very good British blues player.

"I was like 'Oh, can I get up and play a song?', so I got up and it was a lot of fun. About ten years later I met George again at a jam session. George was just hanging out so we got up and played. He said he was really impressed and took my number. The next morning he phoned me with half a dozen gigs then after those he gave me gigs for the rest of the year."

How did those gigs help your development as a drummer?

"It was a really good learning experience for me. Through Papa George and Bobby Tench I met Gary Moore and did a few shows and then I met Buddy Whittington, who I'm playing with now. It's all been a chain of events that stem back to that first jam session."

Presumably blues is a style of music you enjoy playing.

"It's a style I didn't think I would enjoy playing, but once you get how you're meant to approach the music it's quite fulfilling. Being able to play a blues shuffle and make it sound authentic is challenging."

Does your preparation for a blues gig differ from a jazz or rock gig?

"Blues music is the one type of music that if you got a call at the last minute for a gig, once you understand the general 12-bar structure it's quite straight forward."

"You use what you feel is necessary for the gig. With Hot Leg I was using a massive kit with two bass drums and loads of cymbals - it was right for the gig. For the blues, I don't need that. I tend to just use kick, snare and either one rack and two floors or two racks and one floor."

Do you have any advice for young blues drummers?

"My biggest advice is to use gear that relates to the job you're going to do. If you're doing a blues gig where your job is to hold it down in the background, you don't need 15 toms and cymbals. People should also check out Stevie Ray Vaughan, BB King, Buddy Guy and Clapton. They'll give you a good idea of how to approach blues. Another guy I really like who people might not say is a typical blues drummer is Mitch Mitchell. He was just able to fuse that jazz element with blues. That always excited me."

You can catch Darby on tour with Buddy Whittington later this year. For more information visit www.darbytodd.com