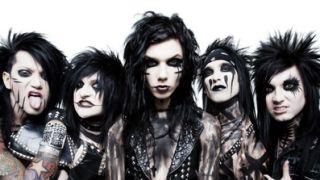 Black Veil Brides drummer Christian Coma has won an army of fans in the last year or so thanks to his insane mix of outrageous flash, balls-out stick shredding and beautiful technique.

Which drummers inspired this crazy concoction? We got on the phone to CC to find out for ourselves.

"I started out as a jazz drummer. I had a really cool instructor that was a jazz drummer. When I first started playing guys like Buddy Rich and Louie Bellson. I actually met Louie Bellson when I was 12. That was a really big thing for me. I don't know how old he was, but he had people helping him up on the stage, he looked 80-something and then his playing blew me away. He was just tearing it up. After his solo he gave me his sticks. That was life changing for me as a drummer. He was a super nice dude. Gene Krupa as well. Steve Gadd, these guys blew me away. Those guys were phenomenal."

"In my early teens I went to a metal show and that was it for me. I became a metal head. Drummers like Joey Jordison, anyone can see from the way I play that Joey was an influence on me"

"Also virtuosos like Dennis Chambers and Thomas Lang. I don't even know what they're doing half the time, they are insane. I try to take a little bit from everything. I take inspiration from everything, all kinds of music."

"I checked out Messuggah recently. Tomas Haake, I don't know what's going on in his head. He has some crazy patterns going on. Brann Dailor from Mastodon is another one that I'm always really impressed by."