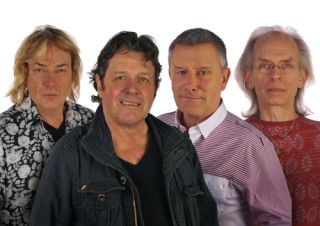 Asia's original line-up is back with album number three since their 2008 reunion. Head inside to see what drum icon Carl Palmer makes of it all.

"It is the 30th anniversary of Asia's first album, which reached number one in the USA Billboard charts for nine weeks, and became the world's biggest selling album in 1982," Carl says. "And now we find ourselves in 2012, and I am as excited about Asia's new album and UK tour as I was back in 1982."

While pointing out the vast experience between the four members of the band, Carl also stresses that age is just a number.

"It is no secret that between us we are nearly 250 years old, but our view is "60 is the new 40", and we are all playing as well as we have ever played, and we've all remarked that we're enjoying it more than ever."

"In this, our 30th anniversary, Asia will once again be travelling the world, as we have done every year since our reunion in 2006. It will be our fourth visit to Japan, where Asia is particularly popular."

A drum icon in his own right, Carl remains grounded enough to acknowledge a lengthy list of people that continue to make it all possible.

"I wish to thank my drum sponsors and all my endorsement companies who support me, and Asia, and The Carl Palmer Band, with 21st century equipment and 21st century enthusiasm and service, which enable me to breathe even more life into our 20th century favourite pieces, plus a few of the newer songs of course.

"Finally I wish to thank all the enthusiastic fans who buy our records and buy our concert tickets. Without you, we would not be able to share our passion. All members of Asia have the same feeling of fulfilment when we lock into our live music, and feel the energy of the audience, which these days is drawn from the '60s, '70s, '80s, '90s, '00s, and even new fans from the present decade, whatever this decade is called. It is of constant enchantment to us that our audience, like us, can span six decades and we meet teenagers and twenty-somethings who know more about Asia, and more about the individual members' heritages, than we do. That is our inspiration."