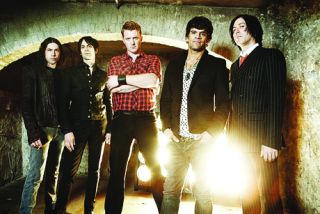 If you've picked up the latest issue of Rhythm you'll know by now that the Queens Of The Stone Age gig is no walk in the park.

Not only does the band feature accomplished drummers Josh Homme and Troy Van Leeuwen, they've also had a host of top sticksmen down the years. In honour of Queens' long history of sublime drum work we've taken a look through their back catalogue and picked out some of our favourite moments.

By track two of Queens' debut album they had already served up a classic example of what they're all about. 'Avon' finds drummer Alfredo Hernandez kicking things off with a hypnotic repeated fill pattern before moving into a driving verse beat. More than a decade on and this one still sounds superb.

Nick Lucero may have only appeared on a handful of Queens tracks, but the tambourine-filled, laid back 'Leg Of Lamb' remains one of our favourites from the band's back catalogue. Check out the studio version below and see why we love it so much.

Feel Good Hit Of The Summer

Gene Trautmann's history with Josh Homme goes way back to the Kyuss days, when he just missed out on the gig replacing Brant Bjork for the influential stoner rockers. As the turn of the millennium approached Trautmann joined up with Queens and shared the recording of Rated R with Lucero. The combination of an all-out aural assault and a substance-drenched haze is none more evident than in the beat Trautmann lays down for album opener 'Feel Good Hit Of The Summer', with the drummer's tom and snare smashes underpinning the whole thing.

When we heard that Dave Grohl was getting back behind the kit and joining up with Queens for their follow-up to Rated R we just about wet ourselves. When we heard Grohl's playing on lead single 'No One Knows' we went the whole hog and soiled ourselves. Aside from showing a shocking lack of bowel control in the Rhythm office, 'No One Knows' provided proof that Grohl and Queens were a perfect match. The Homme vibe shone through in the track's robotic straight-up verse groove, while Grohl injected his own power-fuelled flair with the terrifying chorus fills. And don't even get us started on 'First It Giveth'…

Current Queens incumbent Joey Castillo has held the position for almost a decade, making himself indispensable thanks to his awe-inspiring power and sublime technical skills. Anyone left wondering whether he'd be up to replacing Grohl at the Queens drumstool was put in their place as soon as they heard the jam-block filled 'Little Sister'. But for us the real highlight of the Lullabies To Paralyze record came from 'I Never Came' as Castillo plays hoops and snare before heading into a plodding, hypnotic chorus pattern and the bass drum heavy 'Tangled Up In Plaid'.

For more from Queens pick up the latest issue of Rhythm which features a huge Joey Castillo cover feature.