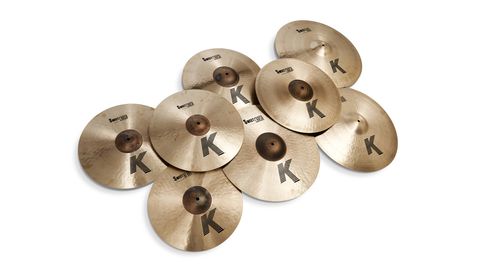 These cymbals bridge the gap between Zildjian’s classic K and more modern A series. They are highly musical, dynamic and, above all, versatile instruments. Prepare to be converted.

Before their official launch at the Winter NAMM show in January, we were invited on a secret mission to Headstock Distribution in the Midlands to check out the brand new Zildjian K Sweet cymbal collection.

Following on from the success of the infamous 23" A Sweet ride and a few select Sound Lab Prototype K hats and rides, Zildjian has decided to take the sweetness to the next level by applying it to an entire set, this time falling into the more traditional K series.

In keeping with the more vintage vibes of the K range, K Sweets feature a traditional finish, meaning the cymbal’s surface has not been buffed to a shiny or ‘brilliant’ finish.

This inherently gives the cymbal a darker, warmer character. Other shared K characteristics include complex and deeper lathing patterns, in addition to laborious hand-hammering which goes a long way to shaping the overall sound of each cymbal.

Rather than that burnt-on look that some un-lathed cymbals have, the K Sweet bells have a much smoother, marbled oil effect which is very unique. The ride cymbals are the only members of the K Sweet family to be completely lathed for a uniform finish, leaving them with a brighter bell projection.

The overall profile of each cymbal is fairly low except for a raised bell, particularly on the rides. This flatness makes the rides more crash-able and the crashes more ride-able, which ultimately makes for a much more versatile instrument.

The cymbals are also thinner than regular Ks which renders them a little darker in tone. The edges are even thinner still. The result is that these cymbals feel softer under stick and their thin profile enables more potential for dynamic playing.

Versatility is a word that gets knocked around a heck of a lot when discussing instruments. One of the main reasons being that when we make a large investment in a kit or set of cymbals, we don’t want to have to go out and do it all over again in order to play a different style of music.

This is where a cymbal range like the Zildjian K Sweets really comes in handy. Not only are the cymbals deeply musical and complex in tone - making them very applicable to jazz or acoustic styles of music – but they also have enough brightness and presence to work well for rock, country, funk, you name it.

They just sit in the mix perfectly, regardless of style. K Sweets could be described as the chameleons of the cymbal world.    With no regular 14" hi-hats available we go for the smallest 15" pair. As with the majority of hats, the bottom cymbal is heavier but, in this case, not by a large margin. They are super crisp, fairly low-pitched and have a rich open sound.

The 16" pair are noticeably lower in pitch and generally a little more aggressive in nature. Strangely they don’t feel oversized at all and become the norm very quickly.  The characteristics of the crashes vary enormously from the smallest 16" to the monster 20".

Aside from the obvious pitch differences, the 16" and 17" crashes are much faster and brighter than expected and lack the complexities heard in the larger models.

For us, the magic really starts to happen from the 18" upwards where you can hear the light and dark elements mix with the (dare we say it) sweetness and clear definition of the new Ks.

The 19" and 20" crashes also open up quickly but sustain for a fair while longer. They ride satisfyingly and the un-lathed bells add an interesting texture although, unsurprisingly, neither can hold a torch to the dedicated 21" and 23" rides in this area.

The 21" ride is an absolute stunner and personifies the versatility of the K Sweet range. It has a bright, clear stick definition which is supported by the dark and warm overtones. It crashes beautifully and has just the right amount of wash.

The high-profile bell is crystal clear and light yet somehow fits just as well into heavier tunes as it does latin-style bell patterns. The 23" ride tips the balance a lot more between the initial attack and wash. It continues to hum away a long time after it’s been struck. A beautiful ride but trumped by its smaller sibling in regards to clarity and versatility.