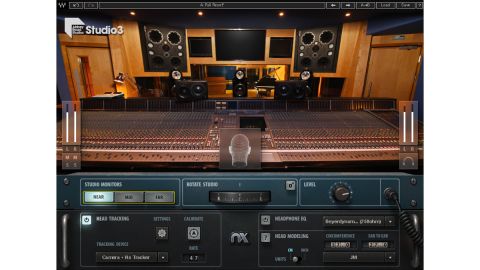 Over several decades, Studio 3 at Abbey Road Studios has played host to all manner of high profile projects. Waves Abbey Road Studio 3 (VST/AU/AAX) is the latest manifestation of Waves’ Nx system, using its immersive 3D technology to recreate the control room of this famous space in your headphones.

In terms of functionality, Abbey Road Studio 3 could be perceived as very similar to Waves’ Nx - Virtual Mix Room plugin. You start by inserting either a stereo or surround format plugin, depending on which format you’re working in, upon which Nx will translate the balance onto stereo headphones in such a way that sounds like the phantom image is coming from monitors in front of around you, rather than within your head.

The plugin features various settings to influence this. Head Modelling has parameters for head circumference and ear-to-ear distance, both of which you’ll need to measure and enter manually. If you listen while changing parameters, these clearly make quite a difference. Head Tracking uses either your computer webcam, Waves’ own headphone-mounted Head Tracker device or a combination of the two to track your head movements, modifying the sound accordingly.

The Settings button opens a floating tabbed window in which you can activate camera and Bluetooth tracking, select the desired tracking devices and observe the various 3D parameters as they’re tracked in real time.

With these options decided, you then centre your seating position and select the Calibrate option, so your movements are suitably referenced. Incidentally, you don’t have to use Head Tracker if you don’t want to (more on this below).

Much like with Virtual Mix Room, Abbey Road Studio 3 lets you use any headphones you like for the process, as it’s not primarily trying to ‘correct’ them to some kind of standard. However, the Headphone EQ option conveniently includes calibration curves that help to smooth out the frequency response for a handful of preset headphone models.

What marks this plugin out from Virtual Mix Room, of course, is that it incorporates the Studio 3 control room ambience and loudspeakers. When using the stereo version of the plugin, you get a choice of three pairs of monitors (Near, Mid and Far), while for the surround plugin, the monitors default to the midfields. Waves doesn’t actually specify the monitors used, but Abbey Road Studio 3’s main monitors are well known to be soffit-mounted Questeds (the Q412 system), and the surround monitors are the floor-standing ‘headed’ B&W 800D, both of which match the graphics on the plugin, as you’d expect.

It’s also worth noting that the plugin has a specific ‘sweet spot’, captured using impulse responses. This is different to the mathematical model approach used for Virtual Mix Room and means there’s no way to adjust speaker positions, and no forward or back head tracking. The room ambience is also fixed, although switching between each set of monitors influences things, replicating the mix room.

The different monitor options do sound quite different to each other, with a nicely upfront directional sound from the nearfields and a more balanced image from the midfields. The main monitors sound more distant and have a bigger ‘hole’ in the centre of the stereo field, and although they deliver a bigger scale, it ultimately stands to reason that headphones won’t really ever deliver the physical impact that main monitors would.

Far more sonic variation is created by the head tracking. Your webcam and Waves’ Head Tracker combine to make this very responsive (we achieved a frame rate of 40 upwards) and as you turn your head, the effect is both realistic and quite addictive. Whether it’s beneficial in a mixing situation, though, is debatable, but if you’re after predictability, simply switching head tracking off is always an option.

A further control, Rotate Studio, shifts the listener perspective horizontally through a full 360 degrees. If you’re working in stereo, turning 180 degrees away from the monitors simply makes it sound like they’re behind you. In surround, however, Rotate Studio shifts everything, so at 180 degrees you can face the L and R surround speakers and they’ll be reversed in your headphones. Not only a nice touch sonically, but you also get to see the graphics-rich back of the studio with its outboard racks, patchbay, tape machine and so on.

As noted, Abbey Road Studio 3 is less tweakable than Virtual Mix Room, albeit with the benefit of more loudspeaker options. For those who like switching between monitors as they work, a compact floating switching window would be a great addition, as would some form of small mono speaker option.

Those points aside, however, Abbey Road Studio 3 delivers a tight, neutral monitoring space, is very slick and reliable, and provides a practical and effective spatialising solution for anyone mixing on headphones.

"Our judgement would be to suggest reserving judgement till you try it. You may enjoy the added dimension to your monitoring. " Attack Magazine