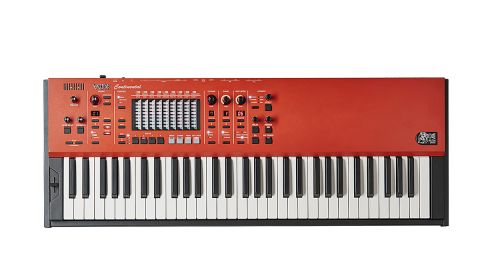 The Continental promises so much but can leave you with mixed feelings. it delivers great-sounds with solid build and portability, but falls short in features and affordability compared to the competition.

Originally launched in 1962, the Vox Continental become popular with many acts of the time, including The Animals and The Doors, largely due to its portability compared to Hammond’s super-heavy tonewheel beasts!

It also had a very distinctive bright, edgy and charming character which allowed it to really cut through a mix against loud guitars.

For the new Continental, Vox has gone for a complete reinvention, the only thing remaining being the tomato-soup-red and black colour scheme, along with a new take on the original chrome stand (while you don’t pay extra for this, it’s pretty ugly!)

The overall design is quirky and feels very high-quality (as you would expect from Korg). The chassis and top case are metal (like Nord’s) and this machine is most definitely roadworthy. With this in mind, the 61-note model is particularly lightweight, plus all the switchgear feels solid.

There are another couple of nice touches, from the backlit Vox logo on the rear, to the backlit NuTube valve grille (this is the first time Korg’s new mini-valve technology has appeared in a keyboard). We also dig the free space to the right of the controls, which is handy for placing a laptop or small synth. We would have loved to see the inverse-style keyboard re-appear, but that could be an option for the future.

The keyboard itself is the tried and tested keybed from the Kronos LS and it works very well, with enough accuracy and control for piano sounds, while retaining speed for synth and organ playing. Vox has also minimised the lip on the key front edge, making this board very comfortable for palm slides and piano playing too. If you want a longer version, there’s a 73-note model for an extra £100.

From left to right: first up you’ll find controls for valve drive and a Dynamics dial which controls how the sounds interact with your playing style. Then you’ll find a splittable (natively or over MIDI) organ engine capable of Tonewheel (CX3), Vox and Farfisa Compact emulations. Although the LED drawbars work fine in the main, if your fingers get sweaty or you want to make super-quick changes, then it’s sometimes tricky to be accurate with them.

Regardless, it’s great that you can also use the drawbars to EQ sounds and to change certain settings (such as LFO pitch speed, envelope controls and filter cutoff/resonance). It’s nice that, unlike Nord’s Electro, there’s a multifunction lever to the left of the keyboard that acts as a pitchbend on the synth sounds, as a tremolo/panning switch on the electric pianos and as a rotary speed control for the organs. For percussion, though, key click and vibrato are all preset and not editable, letting down an otherwise solid engine.

Switching in the NuTube valve circuit adds weight and harmonics to all the sounds, and hopefully we’ll see this make its way into more upcoming Korg instruments. The onboard effects all sound very musical and warm and there’s enough onboard to cover most situations including a delays, reverbs, chorus, flanger, phaser, wah and compressor. Each of the sounds has its own preset effects, which can then be layered with the front panel global effects. You can control wah and volume using the included expression pedal.

Next up is the EP section which, like the other engines, features a dedicated volume control along with a variation screen with preset variations of either Tine, Reed or FM-style pianos (which sound nicely authentic; warm, clear and soulful).

In particular, the tine and reed pianos are excellent, and with some valve drive and a little custom EQ and compression, you’ll find the Vox to be a very convincing electric piano emulator - it’s a real joy to create and play classic Rhodes/Wurli patches. Next to the EP section is the Piano section, which includes various piano types (grands, uprights and electric grands). There are several useful and solid-sounding piano variations to choose from, and all work well for comping and soloing.

The final engine is the Key/Layer engine, which offers a small range of mostly useful (though ultimately pretty unexciting) keyboard and synth sounds, including some good clavinets, basic lead sounds, warm string and synth pads, and useable synth brass and poly patches. You can layer any two engines simultaneously, though there’s no splitting, except for within the organ engine itself. General patch selection and saving is easy via Scene memory (four banks of four patches).

So what’s the conclusion? Well, on one hand you have solid build, portability and a lovely-feeling keyboard with decent organ, piano and EP engines, paired with some really solid-sounding FX.

However, there are quite a few downsides which let down what should have ultimately been a Nord Electro challenger: it’s roughly £400 more than the market-leading Nord Electro 5D SW61, plus there’s no octave transposition per-engine, no separate outputs per-engine, very rudimentary FX tweakability, no amp simulations, no splitting between the piano/EP/ organ/layer sections, and no user-sample memory

What's more, at higher levels, we did experience some ground loop noise. However, this is not uncommon with a class2 power supply, and the inclusion of XLR connectors and a GND-lift switch mean it's very easy to eliminate without the need for an external DI box. It's worth noting also that the organ sound adds its own 'noise' from the sound engine, but this is in keeping with accurately emulating the original.

With all this in mind, as much as we were initially excited about the Continental, ultimately it has left us with very mixed feelings.