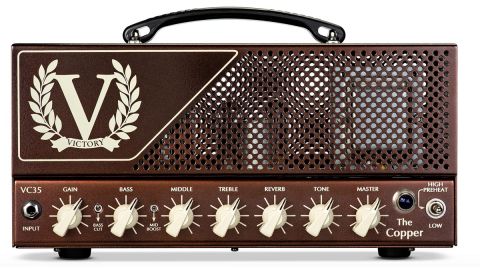 Victory's VC35 The Copper has an incredible tone and response, and surely would gave many high-end boutique amps a run for their money.

British guitar amp designer Martin Kidd and his team at Victory have made it something of a name for themselves as lunchbox-amp specialists.

Comprising portable models such as the Kraken,  V30 Countess and Sheriff 22, and the super-sweet RK50 Richie Kotzen signature amp, Victory's Compact Series is building a growing reputation for delivering a superb tones in portable formats. The latest, the V35 head, aka the Copper, is single-channel 35-watt amp that draws inspiration from classic British amps of yore.

With a quartet of EL84 power valves, plus a NOS EF184 pentode in the preamp those British amps would be Vox. A small-format pentode, the NOS EF184 is not dissimilar to the EF86 you would find in early Vox amps. But the Copper is certainly no clone, and has a generous slice of Victory's signature spin.

While you'll find the British treble-forward chime and a midrange that could poke through concrete, the Copper will handle all kinds of styles, from pop jangle to higher-gain classic rock, and those American boutique-style cleans that are quite sumptuous served neat yet nonetheless provide a sweet platform for pedals.

Both the Copper's digital reverb and series effects loop are footswitchable

Victory describes the onboard digital reverb as being somewhere between room and plate, similar to its V40 amps

The Copper takes its name from a dark metallic copper finish. It has a white screen-printed logo and text. We've alluded to its portability but at 8.5kg it is certainly more than manageable to carry to and from gigs and rehearsal, and it ships with a padded gigbag – with an all-important pocket for the VC35's footswitch.

Why a footswitch on a single-channel amp? Well, the two-button footswitch supplied controls the onboard digital reverb – somewhere between room and plate, says Victory – and the series effects loop. Another feature to rouse the interest of the pedal enthusiast in your life. The footswitch's LEDs let you know if the effects loop or reverb is on or off.

Featuring new models from Boss, Blackstar and Mesa/Boogie, here are the finest amplifiers of last year

Under the hood you'll find a tough PCB build. One main board will secures the valve sockets and front panel controls, a smaller board houses reverb, while smaller PCBs take care of the sockets on the rear panel. The wiring is meticulous.

As we have come to expect from Victory, the VC35's front panel layout is simple and intuitive. There are controls for gain and master volume, bass, middle and treble, reverb and a master tone control which comes in really handy for making quick tweaks after you've dialled in the tone you want.

The V35's front panel also features Bass Cut and Mid Boost toggle switches, which come in handy when switching between guitars. There is also a half-power switch that brings the VC35's power output down from 35-watts to 12-watts – at half-power the VC35 should still be loud enough to gig, but of course you get that saturated tone a bit earlier and at lower volume.

On the rear panel you will find the series effects loop's send/return jacks, a trio of fixed impedance speaker outlets, and a footswitch socket. There are external bias test points, too, with a recessed adjuster screw to optimise the power output valves' performance without requiring you to open the chassis.

Of course no amp wants to limit your choice of guitar, but the VC35 Copper is specifically designed to accommodate a number of different guitars, offering the EQ and boost/cut switches to offer a wide tonal platform for singlecoils or humbuckers.

There's definitely a vintage vibe to the Copper's voicing. The EF184 pentode helps imbue its tone with the warmth and depth you might expect from a 1960s amplifier without suffering from the sort of microphony that could plague amps that carried the EF86 pentode. There were no noise issues with the VC35, even when dimed.

We can't talk about Vox-inspired amps without discussing its chime, and in low-gain settings, the VC35 lends an impressively musical quality to chords, and, as you dial in a little more gain, breaks up nicely into a growl. Again, the warmth is hard to see past here. Playing leads you'll find the sustain generous and smooth, the kind that makes you feel good about your playing, working with you rather than against you.

That said, the VC35 is hugely responsive to your picking, capable of articulating all the subtleties in your playing, and that also means the mistakes as well as your more inspired moments. As ever, with responsive valve amps it is very much a conversation between the player and the amp.

There are a number of sweet spots with the Copper. Blues-rockers will do well to engage both the Bass Cut and Mid Boost switches and park the gain dial at a very respectable three o'clock. There's just enough hot sauce for leads, and rolling back on your volume control cleans it all up nicely.

With a Les Paul it thickens up nicely, generates more sustain, a little more growl, and a voice that comes somewhere out of the mid-Atlantic between an AC15 and a Deluxe.

As to volume, the VC35 projects plenty from the matching 2x12 vertical speaker cabinet, and should have more than enough for gigging. The VC35 Deluxe model adds full valve-driven spring reverb and tremolo to the mix, but we found the digital reverb here to be excellent, adding a further depth to a tone that's already three-dimensional.

In sum, Victory's VC35 The Copper is built for players of all kinds of styles, from blues and rock through to jazz and country. Its dynamic performance welcomes different approaches, rewarding the skilled player with a responsiveness that is alive to your guitar but also capable of layering on warmth, sustain and that feelgood factor we all look for in a good valve amplifier.

But the VC35 is better than good. It has an exceptional range and subtle gain structure that rewards experimentation. The single-channel design might be a little restrictive for some, but with the footswitchable series effects loop and reverb offers a good degree of versatility for those with a pedalboard they want to bring into the mix. Throwing your favourite dirt box in front of the Copper is also a workable strategy.

Ultimately, the VC35's magic lies in that responsiveness, that articulate delivery allied to the warmth will reward solid playing with a tone that's easily the equal of many US-built boutique amps. It's a heck of a lot cheaper, too. OK, so it's not cheap but for vintage tone in a portable format, with an accessible range of tones and immaculate build, the Copper might just be the gold standard.

MusicRadar verdict: Out-of-this-world tone at real world prices makes Victory's V35 The Copper great value, and a serious option for those looking for an alternative to the over-heated US boutique amp market.