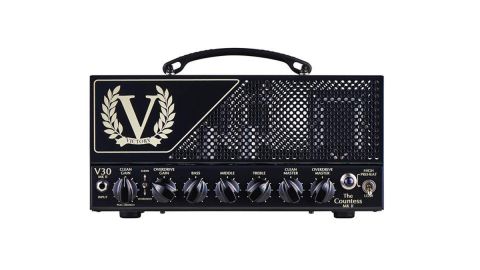 Victory has done a great job with this V30 Mark II.

It seems we still can’t get enough of lunchbox heads; almost every amp manufacturer has at least one in its catalogue, while for some they’re the most popular model.

Victory is no exception, with no less than eight on their website (seven if you discount the Mark I V30). It’s clear Victory has hit on a winning formula and most of that’s down to the V30 ‘The Countess’ head, which was Victory’s first lunchbox head.

Originally designed for the insanely talented Guthrie Govan as his ‘fly-in’ amp, the V30 is one of Victory’s most popular models. New for 2018, the The Countess has received an upgrade and here we’re looking at one of the first Mark IIs to roll off the production line.

Resplendent in its new black chrome finish, the ‘The Countess’ V30 Mark II looks smart and purposeful with Victory’s trademark unperforated chevrons on the front and back of the top cover and clean, uncluttered cream lettering. The metalwork is thicker than some of Victory’s competitors and it’s been accurately bent so there are no sharp corners.

Removing the bottom cover reveals a typically neat PCB layout, with one large board containing everything apart from the power switches and rear panel sockets. The board is full of high-quality components, including high temperature capacitors  and metal film resistors for low noise and consistency. There’s not much free space inside the chassis, so it’s good to see the wired connections are all carefully routed to avoid strain.

The new V30s controls are nearly identical to the Mark I version, with two pairs of gain and master volumes for clean and lead channels, sharing a conventional passive bass, mid and treble EQ. The new crunch channel option lurks behind a push/pull switch on the clean channel gain control and can also be accessed from a supplied two-button footswitch. There are no channel indicator lights on the control panel but the footswitch makes up for this with LEDs to indicate clean/crunch and lead selection.

On the rear panel, the Mark II has lost its predecessor’s single-ended mode although the arrival of external bias adjustment and test points is very handy; there’s also a manual ‘Nomod’ switch to vary the EQ if needed. You still get a selection of speaker outlets and a series effects loop. Overall it’s typical Victory: smart, purposeful and hard as nails.

“The reason we decided upon a Mark II version was largely down to customer feedback,” Victory’s main man, and chief designer, Martin Kidd explains. “Some felt the original V30 had too much bass and they found it difficult to get a crunch sound in between the clean and lead channels. The design went through a few changes but was initially a ‘little brother’ to the V130 head we launched in January 2017, with a very similar circuit and feature set. Spending time with Guthrie, and performing some modifications as we went along based on his observations, I think was when the Mark II design finally came together; giving us three gain structures and five very useable sounds, while retaining much of the character of the original that Guthrie still felt at home with.”

Plugged into a Vintage 30-loaded 2x12 cabinet, the V30 Mark II switches on smoothly and quietly with practically no hum or hiss, indicating a very well-sorted design. As usual our test guitars included a Fender Custom Shop Nocaster and a ’72 Les Paul Custom, while the Victory’s clean channel is the same as its predecessor with plenty of headroom and a spanky, medium fast attack that takes pedals really well. The treble is bright without the annoying high-frequency fizz that some amps suffer from, while the mid-range is warm but stays just on the right side of being too nasal.

The lead channel has the same fluid, high gain overdrive voice, which sounds stunning for modern rock and metal, although somewhat over the top for styles that work best with less distortion. Hence the new crunch channel, which uses the clean channel’s volume and gain controls and sits nicely between the other two. There’s no separate gain or tone adjustment, so some degree of compromise is needed, but it’s clear that a lot of time has gone into making all three voices work together.

Most players will find that once they’ve set up an ideal lead sound, the other two voices are pretty much dialled in. The bass is now tweakable thanks to the new footswitchable ‘Nomod’ feature, which offers the original full bass response or a new, tighter response. This new voice works best on the overdrive channel, where it helped improve articulation at higher gain settings, but it’s handy to have the original un-modified, or ‘Nomod’ voice as well.

Creating a Mark II version of any amp isn’t easy - you want to add improvements without losing sight of the characteristics that made it so popular in the first place. We think Victory has done a great job with this V30 Mark II - there are now three very useable sounds that cover a wide range of playing styles and musical genres, while holding true to the vibe that made the original version such a popular choice.

The clean channel is perhaps a little flat when used on its own but sounds great with pedals; the new crunch channel is ballsy and aggressive when wound up; and the lead channel has all the sustain anyone is ever likely to need, with that characteristic Victory sparkle.

Aimed at pro and serious amateur guitarists who lean towards modern rock and metal, the V30 Mark II is another cracking amp from Victory that combines top-drawer build quality and serious boutique tone at a very reasonable price, made with pride right here in the UK.