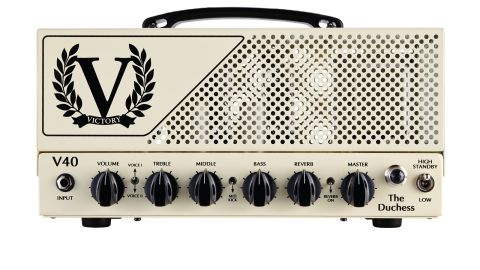 A very portable head with stunning low-gain tone that's in a class of its own.

Victory Amplification is rapidly carving a reputation as the British amp company to watch out for, and with no less a player than Guthrie Govan endorsing its products, that's hardly surprising. Based on the same all-metal package as the V30 head, with a large high-quality PCB inside, 'The Duchess' might look like a typical modern rock amp, but sonically it's very different.

The V40 expands the elusive low-to-medium gain range, putting a wide spectrum of subtly shifting overdrive textures under your fingers. There are rotary controls for gain, EQ and master volume.

The real fun starts with a two-position voice switch, which subtly changes the V40's character. Voice 1 is centred more on the early 60s 'blackface' tone; Voice 2 is edgier and a touch more aggressive, evoking the tweed amps of the 1950s.

A small toggle switch called 'mid kick' adds a touch of extra gain in the midrange, not least to give weedy single coils a lift for solos. There's also a digital reverb with a front-panel level control and on/off switch.

As usual, there are a few extras: a series effects loop, switchable bias to take EL34 and 6L6 valves, a single-ended mode with a switch to even out the wear on both valves, and a couple of defeat switches that remove the reverb and the effects loop if needed.

Then there's the standby switch, which has two 'on' positions for high power (approximately 40 watts) and low power (seven watts). This switch also works in the V40's single-ended mode, offering a choice of around 1.5 watts in the high-power position and 0.5 watts in the low-power setting.

The V40 is a serious piece of work, built to a high standard and just as ready for non-stop professional touring as it is for your bedroom or study.

The V40's sonic palette made us sit up and take notice. By reducing the gain, all the mildly overdriven and chime effects normally squeezed into a fraction of the gain knob's travel now occupy the whole range.

From sparkling cleans to smoky, touch-sensitive 'just on the edge' drive and on to a reasonably aggressive crunch, the V40 can be edged into tweed or 'blackface' territory, with a smoother treble and somewhat tighter bass than those benchmarks.

Along with our usual PAF-loaded Les Paul Standard and an old Strat, we bring along an Ibanez AFJ95 archtop to check out the amp. What never fails to impress us is the way each instrument's character is faithfully reproduced, from the Fender's twang to the woodier growl of the Ibanez's heavier flatwound strings.

Reducing overdrive and distortion has the effect of pushing the guitar forward in a mix - it's more noticeable even when played quietly. The only downside to this enhanced clarity is that the amp becomes less forgiving - fluffed notes and buzzy strings are reproduced with equal precision. However, as you modify your technique to dig in a little more, the V40 rewards with a dynamic response and sustain that's simply stunning.

The V40 Duchess is a unique design - many of its competitors feature high-gain lead channels, teamed with high headroom and often uninspiring clean channels. By focusing on those often-overlooked but highly effective low-to-medium overdrive sounds, the V40 has effectively carved out its own niche, and looks set to become popular for blues, roots, jazz and country players.

There are a few other amps that fall into the same category, but often they're vintage reissues that require some degree of compromise due to a lack of features. But the V40 is bang up to date, and costs substantially less than USA-made boutique exotica, while giving nothing away in the tone department.

If that's your kind of amp, check one out as soon as you can, but be quick: the V40 is likely to have a long waiting list.