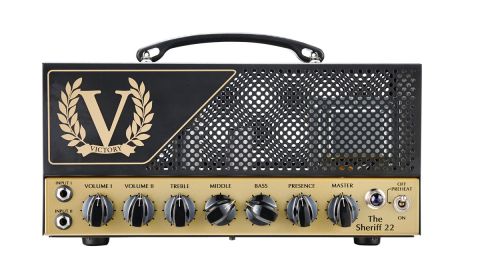 Aimed at players of all levels, the Sheriffs are likely to be on many players' must-try list - we just hope Victory can make enough of them!

Victory amps are designed by Martin Kidd, who has been responsible for some of the UK's best-loved boutique products, and with Guthrie Govan, Rob Chapman and James Bay heading up its artist roster, you can be sure Victory's sonic heritage is one that bodes well for the future.

Here, we're taking a look at a new head that applies Victory's ethos to the tried-and-trusted 'Plexi' format, the Sheriff 22.

Both the 22 and the recently-released Sheriff 44 amps have a fairly similar layout and features, the most obvious difference being that the smaller EL84-powered Sheriff 22  is housed in perforated steel, and the EL34-powered 44 is protected by a plywood sleeve. Both are smart, with portable dimensions and a gold-paint finish on the chassis that echoes the inspiration behind their design, as does the offset control panel of the Sheriff 44.

Inside the chassis, the electronics are mostly PCB-mounted, with one large board holding most of the components including the front panel controls and valve bases. Smaller boards take care of rear panel sockets and switches.

The compact Sheriff 22 replaces the 44's high/low power switch with a separate low power speaker jack, attenuated to 0.3 watts for bedroom use, in addition to a trio of jacks delivering the full 28 watts of output.

This head is built to handle anything from occasional weekend warrior use to full-on touring. We like the clever understated styling, with nods to classic British and top-end American boutique designs, and less obvious touches such as the heavily damped pots that mean the Sheriff's gas-cooker control knobs stay where you put them, together with a satisfyingly loud 'clunk' from the toggle switches.

Teamed with Victory's vertical 2x12 enclosure, the Sheriffs look the business from any angle. The amp powers on smoothly and quietly, with practically inaudible hum and hiss. The simple control layout means it's easy to dial in as well, the standard passive EQ controls interact smoothly with no nasal midrange peakiness, while the Master and Presence controls sit after the phase inverter stage.

We tested the Sheriff with a variety of guitars, including a Strat with regular low-ish output single coils, and a Les Paul Standard with PAF humbuckers.

The preamp channels are voiced differently: Channel 1 has slightly less gain, with a glassy treble, tight bass and edgy overdrive that translates into a great multi-purpose rhythm/crunch sound, while Channel 2 has an extra gain stage for thicker overdrive sounds and a hint of American influence that still has plenty of Plexi punch and harmonic density, but with the sharp edges ever so slightly rounded off.

We like this channel's versatility: it can be bold with plenty of cut, while backing off the guitar tone controls edges things into Dumble/Bogner territory. Both channels are equally well-suited for humbuckers and single coils and the post phase inverter presence control adds a nice sparkle to highs without becoming shrill.

The Sheriff is loud and easily powerful enough for any gig. The Sheriff 22 has some midrange grind when pushed hard, with slightly less clarity from Channel 1 in comparison to the 44.

For instant gratification from Channel 2's higher gain, the Sheriff 22 edges it for us, especially as the low volume 0.3 watt output is perfectly suited for home use and recording.

The V212VH cabinet uses a popular combination of Celestion Vintage 30 and G12H30 drivers and sounds excellent, with a nice low-end punch. The series effects loop is quiet and works fine with semi-pro rack and stompbox-type effects. However, it would  be more useful if Victory had made that hard bypass footswitchable.

The Sheriff amps are likely to become very popular: they're simple, straight to the point and uncluttered - in terms of functionality and sound. The boutique-influenced touches, such as the gold-sparkle control panels and gas-cooker knobs, are appealing.

Build quality is first class, as we've come to expect from Victory, and we think these heads represent very good overall value for money, with no distributor in the middle of the UK retail chain. They're also compact and easy to carry.

They have the kind of sonic character that should appeal to a lot of players, centred in classic British rock and blues but with a refined top-end and attack that's more versatile and suitable for a wider range of musical genres.