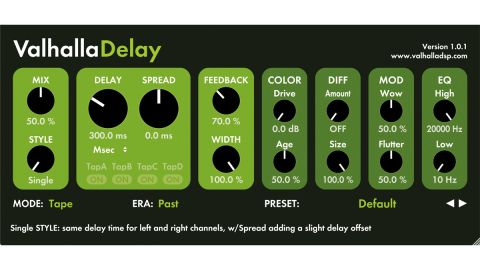 Combining a range of excellent-sounding delay modes with some great ambient tools, this is set to be another must-have plugin.

Comprising straightforward interfaces and excellent sound, ValhallaDSP’s range of reverb plugins have won a lot of fans in recent years.

Along with the likes of Fabfilter’s ‘Pro-’ range or Waves’ best known mixing tools, ValhallaRoom and VintageVerb have entered the realm of plugins that seem to turn up on the hard drives of pretty much every artist that we go to interview. And with good reason.

While Valhalla has dipped its toes in the delay world before, with creative effects like Freq Echo and UberMod, ValhallaDelay is the company’s first proper workhorse delay, aimed at handling everything from bread-and-butter echoes to vintage tape emulations through to altogether weirder, creative effects.

The UI and general design of the plugin will be familiar to anybody who’s used VintageVerb. As with that effect, here all controls are kept up-front in a clean and stylish interface that changes colour depending on which mode is currently in use.

Here we get seven different delay modes, each offering up different style of delay with its own tonal qualities. These include tape and BBD emulations, a high-quality digital delay and a ‘HiFi’ version of the tape echo. There’s also something called Ghost Mode, which combines the HiFi tape echo sound with frequency shifting and reverb-like diffusion to create brilliant drawn-out ambient effects. There are two pitchshifting delay modes too, Pitch and RevPitch, the latter of which also reverses the delayed signal. As with VintageVerb, there’s also an Era setting that can further adjust the tonal quality of each mode with settings for Past, Present and Future.

Alongside this, the plugin also has five selectable delay styles, which control the interplay between the multiple delay voices. Single and Dual are fairly straightforward, offering either a basic mono delay or independent left and right channels. PingPong, similarly, does exactly what you’d expect - offering alternating left and right channel delays - albeit adding flexibility with controls to set these two channels independently. Ratio, meanwhile, lets the delay time of the right channel be set as a ratio of the left, with mixed feedback between the two, for interesting wash-like ambiences. The final mode, Quad, emulates the setup of vintage multi-head tape echoes with four taps that can be engaged and controlled independently.

In all modes, delay times are sync-able, with a timing range from 0 milliseconds up to 20 seconds, making the plugin well-equipped for a broad range of applications. All modes share a number of parameters for further tailoring the sound too, including an age control for darkening the delays, high and low shelf EQs, and a flexible diffusion section that can smooth out delays for more reverb-like results.

It all adds up to an exceptionally well-tooled processor, that excels at everything from subtle delays to esoteric ambient effects. All modes sound great too - the tape emulations convince, and the Ghost and RevPitch functions have lots of unique character.

There are other delays out there that are arguably better equipped in some departments - such as deeper modulation tools or mid/side control-– but ValhallaDelay makes a convincing case for potentially being the only delay you need in your plugin arsenal. This one is an absolute must try!