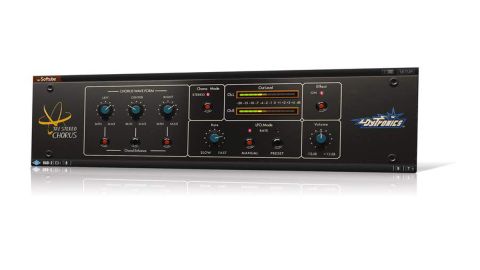 Quick, intuitive and inherently musical, Dytronics Tri-Stereo Chorus turns any guitar, keyboard or other instrumental sound into something special.

When remembering the instrumental flavours of the 80s, among the first that probably come to mind - alongside early digital synths and huge snares - are the super smooth electric guitar sounds so beloved of the US pop and rock scene at the time.

Partly responsible for those warm, evocative tones was the Dytronics CS-5 Tri-Stereo Chorus - an analogue rack unit originally built for use with a modded Fender Rhodes piano (see Making history). And now, owners of Universal Audio’s UAD-2 and Apollo hardware can bring this fabled processor to their desktop productions courtesy of the Softube-developed Dytronics Tri-Stereo Chorus plugin (VST/AU/AAX).

Dytronics Tri-Stereo Chorus is an exacting emulation of the original device, which saw three (hence the ‘Tri’) bucket brigade delay lines - one each for the left, right and centre channels - modulated by an LFO. It loads as a mono or stereo plugin (the hardware was mono input only), and can also be set to output in either channel format using the Chorus Mode button.

The LFO modulates the delay times of the three BBD lines and has three styles of operation. In Preset mode, it oscillates at a slow, fixed rate, with a second LFO modulating gently at a much faster rate for a combination of gentle sweeping and vibrato.

In Manual mode, the speed is freely adjustable via the Rate knob, ranging from 0.03-7.45Hz, as pulsed by the red LED above the Manual button. With both Preset and Manual buttons engaged, the LFO combines the two timings, enabling the generation of more elaborate waveforms.

One of the ‘holy grails’ of hardware effects, the Dytronics Tri-Stereo Chorus was designed by Chuck Monte in the early 80s as a partner for his Dyna-My-Piano modded Fender Rhodes - a punchier, more recording-friendly version of the legendary keyboard that won numerous big-name fans in the 70s and 80s.

The 1U rackmount wonder quickly found favour on the West Coast session scene, not only with the keyboardists at whom it was primarily targeted, but also guitarists, who enthusiastically put it to work forging the silky, hyper-real tones that played such a big part in defining the sound of the decade.

Over the years, the Tri-Stereo Chorus was produced under three different names: Dyna- My-Piano, Dytronics and Songbird. The UAD emulation is of the Dytronics (CS-5) version, notable users of which included Steve Lukather, Michael Landau, Dan Huff and even Eric Clapton. If you can find an original for sale, expect to pay upward of £1500 for it.

The amount of LFO modulation applied to each channel is set with the three Chorus Wave Form controls, and by balancing them, the stereo ‘shape’ of the chorus is defined. This is key to the overall character of the effect.

When the LFO is taken out of the equation (ie, both Preset and Manual buttons are disengaged), the Chorus Wave Form knobs simply offset the delay times slightly on their designated channels.

This can be useful for subtle stereo frequency-boosting, particularly in conjunction with the Choral Enhance button on each channel (flown in from the ultra-rare MkII version of the hardware, apparently - we had no idea!), which applies a touch of feedback to the delay line for added emphasis and ‘poke’.

There’s never been a chorus quite like the Tri-Stereo, and Softube/UA have captured every aspect of it to a T. It’s a very rich, syrupy sound, and the effect it has on electric and acoustic guitars is only the tip of the iceberg. As its original intent suggests, it’s equally at home on electric pianos and, in fact, keyboards of all kinds, as well as synth pads and basses (when applied with care), and even vocals.

Being able to focus the chorusing on the centre or sides in such straightforward fashion is a major benefit, and messing around with the three Chorus Wave Form knobs in search of the perfect modulation balance is always fun.

Dytronics Tri-Stereo Chorus is a fabulous plugin that every UAD-2/Apollo user should check out - certainly not just those working with guitars. It’s one of those infallible studio tools that you just look forward to firing up and finding a place for in every project.