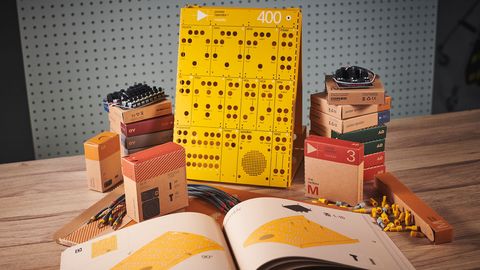 We love the concept, but the lack of precise controls plus some in-use and build issues detract from the overall 400 experience

Teenage Engineering never take the obvious route.  Their range of products now takes in everything from analogue cameras to a recent range of IKEA 3D printing ‘hacks’.

On the music gear, we see some almighty swerves from the norm: the PO range of unfinished calculator synths, the OP mini synth/radio/sequencer/recorder/everything modules, and now this, the Teenage take on modular.

The PO Modular System 400 on test here is one of three products announced over a year ago at NAMM and described as “the poor man’s modular”, although really it’s “the slightly well-off person’s semimodular”.

There are three products in the range: the Modular System 16 keyboard with a sequencer (for £155); the Modular System 170 monophonic analogue synth with nine modules for £315; and this 400 synth with 15 modules for £469. It’s not ‘normal’ modular by any stretch of the imagination; it’ll connect to your Eurorack system, yes, but the modules are preconfigured to sit behind a pre-built fascia, so it’s not customisable.

Really, it’s a synth with modules rather than a modular synth – you might even call it a ‘semi’ if you like. Oh, and you build it yourself.

PO System 400 comes in an IKEA-esque flatpack. The metal panels that make up the unit are ready to ‘fold’ into shape, alongside 15 boxes, each containing a module ready to mount.

TE’s instructions are mostly good but assembly isn’t without issues. If you’re a seasoned flatpacker, you might be done in under an hour. Us? Two hours plus. It’s not as long-winded as the Korg MS-20 kit we built some years ago, but equally satisfying when the LED does light up. OK, you’re assembling pre-built modules – not soldering resisters and capacitors – but the feeling that this synth is more personal to you is worth the time.

You get the full synth experience with PO 400: three oscillators, noise and random modules, LFO, two envelopes, filter, mixer, two VCAs and a sequencer – everything you’d expect, but their interconnectivity is perhaps more than you may have bargained for.

On each oscillator there are three outs; the same with the filter and sequencer, and with pretty much every ‘module’ having a control input, there are a lot of routing options. The manual has a few patching ideas to get you started, but just wading in pays dividends.

I start with a three-oscillator combo just to hear them all in action together, and quickly build a huge sound driven by the sequencer. The manual details how the Reset and Arrow slots can control the sequence position and direction, while other pots set to maximum reset it to step 1.

While they work, getting a melody together can feel imprecise in pitch and control terms. However, getting the sequencer in full flow is easy and effective. Once we have it driving all three oscs, we bring in some FM on the square and sine wave oscillators using the LFO square wave, with both outputs connected directly to the FM inputs for a thumping, ringing metallic type effect on the sine and a driving rasp on the square.

It’s easy to hear them in action individually via the mixer or as one fat sound when played together. Then, routing the square wave through the (slightly disappointing) filter allows me to underpin the sound with a gradually sweeping square. We say ‘gradually’, as moving many of the controls doesn’t always give subtle results. The tuning of the oscs, for example, is massive so you’ll find it hard to home in.

• Pittsburgh Modular Microvolt 3900
A characterful semi-modular that wears its influences on its sleeve, but still manages to have its own unique style and sound.

However, after some experimentation time flies by. This is an all-in-one modular that is easy to get to grips with, you can’t really go wrong, and it will draw you in. The results won’t always be musical – the sequencer and tuning options aren’t quite precise enough – but the results are invariably big and interesting, especially with the Noise and Random modules adding their parts.

You’ll inevitably find yourself in one of those sessions where your path is random, as you plug and unplug, but recording everything to your DAW will result in very usable and varied audio.

As for the ‘poor man’s modular’ concept. It’s neither truly modular, nor is it necessarily for poor people – this kind of cash can get you a very good semi-modular machine. The construction is not without its niggles, it could do with a keyboard, the quirky controls don’t always do ‘precise’, the angle of the front panel doesn’t make for a robust experience when you plug in (and out), and the Eurorack expansion possibilities are vague (though individual modules in Eurorack size have been demoed).

But the left-field thinking, and determination by TE to challenge the norm does reel you in. And as you start to invest the time in it, it can yield great results. You may not end up using it as much as the price deserves, but it’s a curiosity that demands attention. It looks great, it’s versatile, has loads of modulation options and a fat, varied sound

MusicRadar Verdict: We love the concept, but the lack of precise controls plus some in-use and build issues detract from the overall 400 experience.

"These oscillators aren’t going to be blowing anyone away here, but they do sound good. The filter was a little bit underwhelming for me, but I think you’ll need to temper your expectations overall if you’re used to higher end hardware."
9to5toys.com