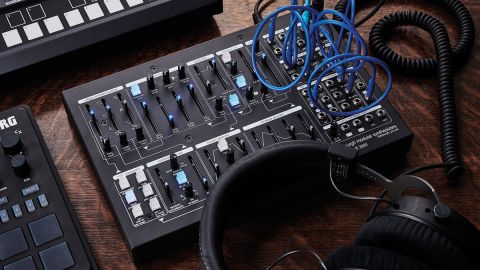 A characterful semi-modular that wears its influences on its sleeve, but still manages to have its own unique style and sound.

To borrow some terminology from the young people on Instagram, semi-modular synths are very much on trend right now.

2018 saw the arrival of new desktop semis from Behringer, Arturia, Moog, Dreadbox and others, and the recent NAMM show has even seen Korg’s budget Volca line getting in on the action. Where, just a few years ago, slapping a compact patchbay onto any old analogue synth would count as enough of a gimmick to act as a USP, these days it takes more than a few token modulation inputs to make an instrument stand out from the crowd.

Much like Make Noise’s characterful 0-Coast, the Microvolt 3900 benefits from being designed by a company with a background in ‘proper’ modular synthesis. In this case, that’s US outfit Pittsburgh Modular, which is best known for its Lifeforms range of Eurorack modules. As with the 0-Coast, the Microvolt represents a compact distillation of ideas inspired by both ‘East Coast’ and ‘West Coast’ styles of modular synthesis.

With a single oscillator and 39-point patchbay, it might not be the most flexible semi- modular in its price range, but from the moment you turn it on and start experimenting, it quickly becomes clear that a lot of thought has gone into the design of the Microvolt’s inspiring, characterful synth engine.

The hardware itself impresses even before we turn the Microvolt on. It’s compact but doesn’t feel too cluttered, and the wood-fronted metal chassis both looks great and feels sturdy. The pre-routed sound engine begins with the oscillator section. Here we get a single VCO capable of outputting separate saw, pulse and sine waves, each of which have their own level control in the mixer section - routed by default to the filter - and an output in the patchbay. There are sliders here to control the oscillator fine tune and the pulse width.

The ‘West Coast’ influence comes via a fourth oscillator output, labelled fold, which generates a wavefolded signal, the shape of which is controlled via the Fold Timbre slider. Both the Fold Timbre and Pulse Width can be modulated, either via internal routings or the patchbay. There’s an FM input port in the patchbay too, which can be used to apply exponential frequency modulation. One final touch in the Microvolt’s oscillator section comes from a Harmonic Sine switch that, when engaged, will apply a touch of subtle mid-range harmonics to the otherwise clean sine output.

The Microvolt’s VCF is described as a ‘binary filter’. Effectively, this is a -12db low-pass filter with an inbuilt soft clipping distortion circuit. It has two modes, standard and ‘Unstable’, the latter of which drives the signal harder and adds extra range to the resonance slider. Somewhat uniquely, the resonance control works in opposing directions depending on which mode is engaged, ie in standard mode the bottom-most position is the minimum amount of resonance and the top the maximum, whereas in Unstable mode, that is reversed.

The idea is to allow continuous resonance sweeps across the two modes, moving up to the maximum in standard mode, engaging Unstable mode, then sweeping back down to add even more resonance - eventually hitting self-oscillation. It might sound confusing on paper - and can seem so in practice at first - but once you get to grips with how everything works, it’s a lot of fun having that extra boost available.

The amp section also has two modes available: a classic VCA and a Buchla-style low-pass gate, which acts like a combined amp and filter, whereby louder sounds also contain more harmonic content. In both modes, the VCA has adjustable dynamic modulation, which is pre-routed to an ADSR envelope generator but also has an input on the patchbay. There’s a Pluck mode too which, when engaged, disables the modulation response control in favour of generating a short, percussive response. Having the two styles of VCA onboard is a cornerstone of the Microvolt’s sonic character, allowing it to switch between response styles akin to both classic synths and more natural timbres.

The Microvolt’s 39-point patchbay isn’t as extensive as that of some of its rivals, but it has some handy tricks up its sleeve. There are inputs and outputs for most of the synth sections, making it easy to rearrange and experiment with the sound engine. There’s an external input too, which feeds into the mixer, and combined with the headphone out can be used to create a feedback loop with level control.

The most handy element, however, is the combined mixer/splitter/inverter. This has two inputs and two outputs. Input A has a trim control that can both attenuate and invert the incoming signal. When no input is connected, this trim control is patched to an internal 5v source, which itself can be attenuated and inverted, or blended with a signal fed into input B.

The other major part of the synths’ character comes from its trio of modulation generators. These are the aforementioned ADSR envelope, an AD function generator - pre-routed to the filter - and an LFO and randomisation section, linked internally to oscillator modulation. The LFO has two outputs, ramp and pulse, with a shape control that adjust the ‘roundness’ of the former and the width of the latter. The function generator, meanwhile, has a Cycle switch to engage a looping mode, effectively letting the envelope act as a second, shapeable LFO. This can be pushed into audio rate modulation, great for experimenting with gritty filter and oscillator effects.

The most interesting of the modulation sources, however, is the Complex Random Generator. In essence, this is a semi-randomised six-step sequencer, which is sync’d to the internal clock and can output both gate and CV. The effect is a modulation and control source that can be unpredictable and ‘glitchy’ without being entirely detached from rhythm and movement of your current patch. A complexity slider allows users to increase the unpredictability by altering how often the randomised values of the steps change. It’s a very creative tool and fun to play with, particularly for creating weird rhythms and generative patches.

While you wouldn’t instantly know it to look at it, the Microvolt also packs a powerful MIDI to CV converter with a flexible sequencer and arpeggiator attached. MIDI is fed into the synth via a supplied MIDI to mini-jack adapter that connects to the top of the patchbay also features pitch, gate and mod outputs allowing the MIDI input to be converted to CV and routed elsewhere. The mod output can be assigned to a designated MIDI CC, for an externally-controllable modulation source. The Microvolt has three available clock sources too - an internal clock, MIDI clock or external gate. When using the external sources, there are six selectable clock divisions available.

With the arpeggiator engaged, the Microvolt’s MIDI input can function in one of two ways. In standard arp mode, it works like a classic arpeggiator; cycling through the held notes ‘as played’, with a selectable range of up to three octaves. In Note Sequencing mode, meanwhile, up to 16 steps can be programmed one at a time, with the Hold button used to input rests. There’s a randomisation mode too, whereby the Microvolt will jump to random steps in a preset sequence/arp. The synth can also auto-generate random sequences. In all it’s a powerful, surprisingly deep setup, which is a lot of fun to play with. It’s a slight shame, perhaps, that Pittsburgh didn’t go a little further and add a basic memory to allow sequences to be saved and recalled. That’s hardly a deal-breaker though.

As a complete package, there’s a lot to like about the Microvolt. Its patchbay might lack the extensive patching options of, say, the MiniBrute 2 or even Behringer Neutron, but it feels like it’s been carefully designed to offer exactly the tools needed to get the most out of its interesting synth engine. As with the Make Noise 0-Coast, the combination of traditional subtractive and ‘West Coast’ synthesis tools makes the Microvolt genuinely exciting to experiment with. The deceptively deep modulation sources and MIDI to CV tools add to this too.

Pittsburgh Modular describes the Microvolt as “a love letter to the analogue monosynth” and that feels fairly apt. Sonically it touches on a little of the modulated weirdness of the Arp Odyssey, the creative textures of Buchla’s Music Easel and even the punchy bass sounds of the SH-101, all while maintaining a character of its own. At this price there’s a lot of competition out there, but if you’re going to invest in one semi-modular, you could do far worse.