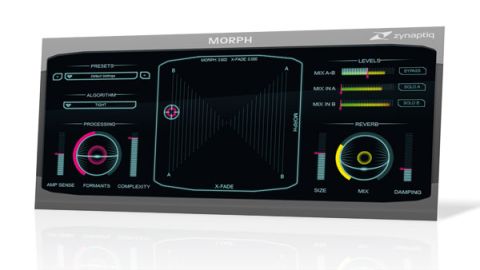 Morph 2 might take a toll on your system, but it's powerful, beautiful and unique-sounding. If you can afford it, get it.

Morph 2 (VST/AU/RTAS/AAX) is actually new to the Zynaptiq lineup, despite being at version 2. The original was developed and released a decade ago by Prosoniq, who were acquired by Zynaptiq in 2013.

In simple terms, the plugin applies the characteristics of a carrier signal to a modulator signal, to perform smooth transitions and create hybrid 'in between' sounds.

It's similar to a vocoder, except that it uses state-of-the art high- resolution algorithms to produce its mutations, at a level of detail that can be quite unlike anything else.

That's not to say that Morph can't do the typical vocoder-style talking synths - rather, that it can go much further than that.

For example, Morph can blend an ambience sample with a so-so synth pad to coax gorgeous textures from the pairing. Or you might use it to transition from the verse of a track to the chorus, with a degree of smoothness that would otherwise take hours of careful automation to achieve.

And sound designers will want to try meshing pairs of instruments together playing the exact same part to produce timbres that exhibit qualities of both sources.

For stereo input, Morph's operation varies slightly from host to host, but pretty much any DAW can feed hard-panned mono signals into a bus to use its dual mono mode.

For full stereo operation, stereo VST/AU sidechain-supportive hosts, such as Live, Logic or Digital Performer, make the easiest options, while Pro Tools HD, Cubase and Nuendo users have to instantiate Morph on a four-channel bus and route their stereo tracks into the front and back pairs of channels. Unfortunately, there's no VST3 version for easy stereo sidechaining in Cubase/Nuendo.

Once you've supplied Morph with the necessary audio, there are five algorithms to choose from. 'Classic' is Zynaptiq's higher-resolution version of the original Prosoniq Morph algorithm, which, they say, has the highest frequency resolution and the lowest time resolution of the algorithms.

Next is 'Interweave', which we found to be generally more transparent and true to the original sound sources (although, apparently, this very much depends on what the source materials are). 'Tight' is a low-latency algorithm intended for percussive material, preserving the transient definition of the source signals.

Finally, there are low-latency versions of the Classic and Interweave algorithms, named Classic (LL) and Interweave (LL), that trade their counterparts' higher frequency resolution for higher time resolution.

Both the algorithm and the source material need to be chosen carefully, as a bad match will result in unusual metallic sounds - although that might be exactly what you're after, of course.

In either case, there are further controls to help you refine the character of the morphing. Amp Sense determines how much the carrier's amplitude is modulated, Formants is a global formant shifter, and Complexity reduces the resolution of the morphing, which can prevent hybrids from becoming too scrambled and noisy if the sources have little in common. There's even a rudimentary reverb included that sounds pretty good and can be handy for smoothing morphs.

With Morph 2, Zynaptiq has successfully grabbed Prosoniq's baton and run with it. It's a must-have for lovers of unusual and genuinely 'different' sounds.