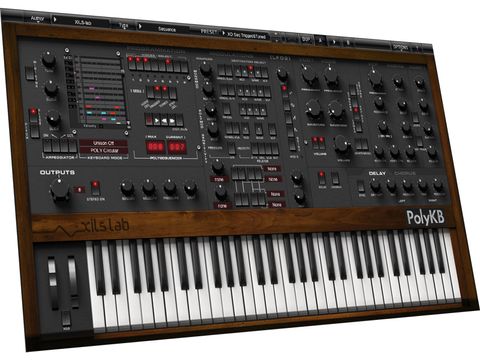 A lush sounding recreation of the Poly Kobol - great tones with the benefits of MIDI and automation.

XILS-lab is fairly new on the software scene, but has already garnered praise for its emulation of the classic EMS VCS3. For its next trick, it's hunted down one of the rarest analogue poly synths known to mankind in the form of the RSF Poly Kobol.

Around 30 of these beasts were made between 1979 and 1982, so the chances of comparing the softy to the real thing are slim. For the most part, the PolyKB is faithful to the original spec and follows the classic subtractive architecture of two oscillators, low-pass filter, dual oscillators and envelopes, mod matrix and polyphonic sequencer.

As we have come to expect, the layout has been meticulously copied right down to the shade of the wood panelling and side cheeks. When it first loads, the GUI is enormous - too big, in fact, for most laptops - so you will probably need to reduce the GUI size in the options menu and reload the plug-in so it fits.

The synth is split into two main sections with the knobs up top and the keyboard below. The synth parameters are on the right, the modulation section in the middle and the sequencer/arpeggiator over on the left - just like the hardware.

There are two LFOs sharing the same spot on the panel, which might cause some initial confusion. To switch between them, you will need to click on the heading and the controls will swap over. They offer four waveforms along with S+H and can be free running, synced to tempo and key re-triggered.

All modulation sources are applied in the same way. The choice of destinations is limited to VCO pitch, waveform shape and filter cutoff and the amount is applied to all of the selected routings.

Tucked behind what looks like a metal plate concealing what was the cassette storage mechanism are the stereo space and sequencer modules. The stereo positioner allows you to place each voice in the 2D plane, not only from left-to-right, but also in distance from the virtual microphones.

"There are two LFOs sharing the same spot on the panel, which might cause some initial confusion."

We found the sequencer easy to record, but a bit fiddly for editing, as the small work area is quite restrictive. You can't edit the note pitch manually and the manual doesn't inform you of what the different colours represent.

As this is an emulation of vintage gear, the sound definitely leans towards the old-school and it's shown off throughout the banks of presets. There are plenty of lush pads, screaming sync leads and weird radiophonic style effects. The raw sound of the oscillators is thick and present, while the low-pass filter is smooth and will self oscillate and scream when pushed with the drive. The analogue PWM might have been a unique feature for a true analogue poly but in today's digital studio it's just another nice sound design option.

In summary, the PolyKB offers a huge sound and a huge GUI and is a faithful recreation.

Listen to what the PolyKB can do: