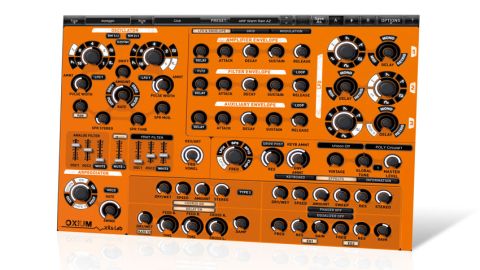 Quirky, fun and sonically lush, Oxium is another forward-thinking, characterful winner from XILS-Lab.

While the Holy Grail of soft synthesis used to be indistinguishable recreations of classic hardware, it's safe to say that we've got over all that now, with 'made for software' synths seemingly more popular than ever. We're all for developers putting their efforts into making powerful and creative synths that are actually designed for the music today's producers make, and a perfect example is XILS-Lab's new Oxium.

Right from first listen, Oxium brings a smile to your face. It's a really good, classic-sounding synth for people who don't necessarily want to sound like Swedish House Mafia, but who still want quick and easy access to modern-style modulation performance. It's based on a two-oscillator architecture, with each oscillator offering up to four simultaneous waveforms (saw, square, pulse and triangle) and pulse width modulation. There's also ring modulation for each pairing, and independent per-oscillator glide and portamento control.

The sound draws on XILS-Lab's experience and so is lushly analogue, complemented nicely by two analogue-modelled filters, one with formant option. Controlling both are some nifty envelopes, featuring a Delay stage, useful for slightly-behind-the-beat initiation.

Oxium's modulation system is its big selling point, and the DADSR envelopes are only the start. As we know from XILS 3, XILS-Lab know their way around a modulation matrix, and here they serve up a very simple, effective interface for directing modulators to their targets.

The three LFOs are operated (as are many of Oxium's controls) via a 'flower' style interface, featuring clickable buttons arranged around a central dial, with one or two different rotary control levels. And this is where Oxium suffers a little. For what is billed as a performance-centric synth, tweaking the parameter you're after can be fiddly, and some buttons are overly-finicky about where you place the mouse.

One area that doesn't require improvement, though, is the Grid sequence modulator. Adapted from XILS-Lab's Le Masque: Delay plug-in, it's a fun and powerful system that works by 'masking' areas for modulation triggering. Like Sugar Bytes recent Cyclop, this encourages the type of rhythmically-implemented modulation that modern electronic music enjoys so much, although with a much more organic feel than that aforementioned bass synth.

Also worth a mention are the pre-wired modulation controls for three common LFO modulations (called 'musical gestures'): auto-wah, tremolo and vibrato. Each can be assigned to any LFO and when two or three are assigned to the same one, fantastic in-your-face modulation is the order of the day. This effectively makes it hard not to make popular dubstep or Skrillex-style modulations at some settings, which will be a boon for anybody out there who's struggled to achieve that sound.

The effects are fun, too. In truth, they sound a tad cheap, but in a beneficial, edgy way that often sets off a patch brilliantly.

Oxium has some great sounds, the arpeggiator is a delight, the presets are useful, the modulation is fantastic, and despite a few niggles, it's a great instrument that any synthesist will enjoy. A few years ago, it would have wowed us totally, but in today's tough market, Oxium isn't so much an essential buy as a synth you really should try.