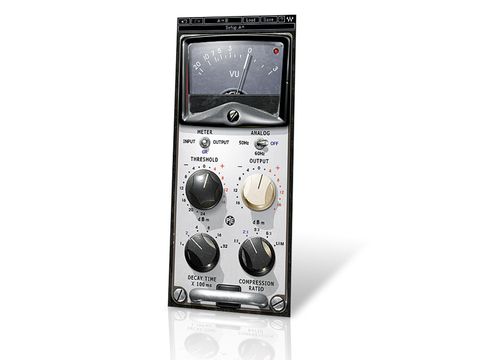 A splendid-sounding compressor that adheres strictly to the original's spec.

Eddie Kramer, the veteran engineer/producer with a CV that reads like a who's who of rock gentry, has given his personal thumbs-up to a couple of vintage model plug-ins from Waves: the HLS Channel and this, the PIE Compressor.

Back in its day, the Pye compressor was broadly acknowledged as one of the best bus compressors around. It was a 1960s solid-state British design made in Cambridge by Pye TVT as part of their mixing console range. This was prior to the advent of the SSL bus compressor that became ubiquitous during the '80s, making almost all precedents a faded memory.

Bus compressors are the ones intended to be inserted across a stereo mix to 'glue' the whole track together. Their quality is in the transparency, so when they're doing a good job, it's not always obvious because you're not hearing common compression artifacts such as pumping and breathing. What you're looking for is a tight, warm sound, a controlled dynamic and a cohesive mix picture.

The controls on the PIE are straightforward and very literal in their recreation of the original. It's a dead ringer for the real thing and the VU ballistics are spot on, too.

A Threshold knob sets the level at which compression starts, and a Ratio dial sets the amount of compression that's applied to the signal once it passes the threshold. It's a fixed attack device, so there's no control for that, but you can set the Decay Time (release) from 100ms to 3.2secs.

Finally, an Output knob enables you to set the post-compression makeup gain.

The only real departure from the original's control set is a switch to toggle analogue hum/noise, which can work on either a 50Hz or 60Hz mains frequency. While this accurate recreation is appreciated, as with many plug-in emulations of old gear, it's a shame that it's not possible to break free of the original's limitations.

Here, for example, variable - as opposed to stepped - release, threshold and ratio controls would have been welcome for more precise control. And why not toss in adjustable attack and a sidechain option?

As ever, though, it's the sound that counts, and this is without doubt a great-sounding compressor that's very easy to set up and use. The beauty is in the solidity, warmth and detail that it brings, and the lack of undesirable side effects.

The tightness and definition in the lower mid and mid ranges really make this a spectacular processor. This doesn't need to just sit on a bus either: it comes in mono and stereo versions, and it's perfectly suited to natural dynamic control of vocals or instruments.

One thing to note with PIE is that it does subtly subdue the very highest frequencies.

Listen to our audio demo to hear what the PIE Compressor can do: