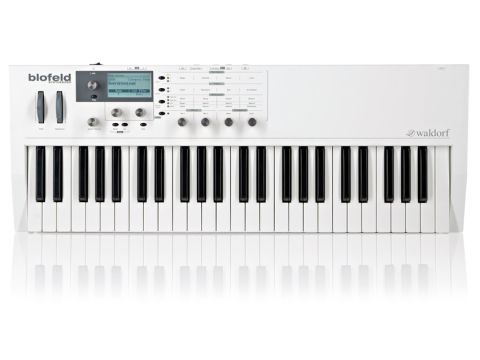 With its new keyboard and onboard memory, the Blofeld is now a thoroughly complete instrument.

The Blofeld Keyboard is a playable version of the excellent Blofeld module. It's a stunner, looking like a perfectly stretched out version of its little brother.

It's the same colour, is built out of the same tough metal, has the same high-quality-throughout design ethos and feels every bit as solid. In fact, the display, dials and layout are pretty much identical, except for the additional performance controls.

These include pitch and mod wheels that feel superb, with nicely raised ridges that are great for accurate modding and bending (much easier to control than the indented type found on most boards).

There's also a protruding lip on the edge of the keyboard case that's great for holding onto while you are using the new wheels.

Also included are octave up and down switches (which should have been included on the Blofeld module originally) and a button labelled 'free' which, according to the manual, was added 'just for fun!'.

In reality, it's a potentially useful extra control that can be assigned to many functions (currently including output mute, sustain, sustain toggle, and a variety of other controller/MIDI assignments).

Also new is a MIDI Out, so you can easily control other MIDI gear.

The keyboard itself is a 49-note four-octave affair (with aftertouch), which is a good compromise for a small and transportable synth (those octave controls extend its range further).

Too many synths we review don't have aftertouch, so its great to see it included at this price point. It's a godsend for controlling pretty much any parameter you can think of, without even having to take your hands off the keyboard.

Talking of hands-free, there's a sustain pedal socket, too.

We're pleased to be able to report that the keybed/board feels great. It's semi-weighted and we'd describe it as precise, quiet, fast to play and cushioned, yet positive feeling on the down-stroke, with a not-too-springy bounce back on the up-stroke.

It's definitely not one of those horribly plasticky and cheap feeling keyboards that all too often feel like you're hitting bare metal on the down-stroke of the keys and give your repetitive strain injury.

The Blofeld Keyboard is reassuringly heavy and weighs in at 8kg (17lbs approx). This is mainly due to the solid metal enclosure and onboard power supply (no wall-wart - other manufacturers please take note).

It's light enough to throw in the back of your car for gigs but well-built enough to reassure it's going to last a while, though maybe the paint might start chipping off with heavy gigging. Only time will tell.

The only real hardware-related gripe I have is that the headphone socket is mounted slap bang in the centre of the back panel, which means you often find the wire trailing over the front-panel and keyboard

We wish all keyboard manufacturers would make front-panel headphone sockets standard. Even the first DX7 got that one right. Also an audio input would have been nice.

In terms of the basic operating system, the Blofeld KB shares all of its features with its module counterpart.

In its most basic form, the Blofeld uses a digital 25-voice sound creation engine to provide a wealth of oscillator types and a staggering array of sound-shaping possibilities that can almost be overwhelming.

However, the parameter matrix system of editing works well and, with a little practice, you soon find yourself ﬂying around. The endless rotary metal dials feel great in use and the display gives lots of detailed and easily readable visual feedback, with zoomed pop-ups for more detailed functions.

The overall sonic character could best be described as warm and analogue-like meets industrial, but as it covers so many staples and bases of sound design, it's hard to pin down.

We can reassure you that it's very high quality throughout, though, and has super deep and punchy lows, piercing highs and versatile filters. It's great for bass, leads, pads, sound FX, atmospheres and much more.

Pretty much every parameter a synth programmer could want is somewhere under the hood including osc sync, unison modes with variable polyphony, four envelopes per voice (with seven different trigger modes), three oscillators per voice, a noise generator (with variable colour) and several LFOs.

There's also a very powerful filter including LP, Notch, BP, Comb and PPG LP modes, several modifiers that affect and twist up modulation sources and 15 or so pages of modulators where you can route anything to anything.

If this isn't enough, there are two drive stages per voice for really mashing up and distorting or just to give a subtle edge to sounds. The distortion can sound nasty or creamy as desired.

Those who adore Waldorf's Microwave and Q models will love the fact that Blofeld Keyboard incorporates their wavetables into its vast palette, along with good solid sounding virtual analogue waves which include the usual sawtooth, sine, triangle and variable pulse, along with separate PWM and FM sources for each oscillator.

The upper wavetables from the legendary PPG wave are included, too. It still amazes us just how much Waldorf have managed to cram into the Blofeld engine.

One of the key features of the Blofeld Keyboard is the inclusion of 60MB of onboard sample memory (it's an option for the original Blofeld now too). There are 41 slots for sampled waves on board and Waldorf provides 41 of their own to kick things off. Some of these are very useable, some not so much but the acoustic guitar, marimbas and strings are worthy of note.

Regardless, you can load your own samples into those slots over USB anyway. Finally, it seems that manufacturers such as Waldorf (and Clavia with its Wave) are grasping the fact that users want to integrate and mix their own samples with onboard modulators, processing and FX.

This is a very welcome extension to the already versatile Blofeld sound palette and makes it very close to an ideal all-in-one performance keyboard, though maybe just a few more hands-on controls would have been a nice performance bonus.

So what to make of the new Blofeld Keyboard? Well, we like it even more than the module version. There's a great and vast array of sounds already on board, and the perfect-sized keyboard feels great to play.

While using a matrix system is always slightly less intuitive than the ideal one-knob-per-function, the Blofeld is still great fun to use. Nine times out of 10 it rewards tweaking with sonic gold, and experimenting often yields just as good results as dialling through the onboard sounds.

There is truly little to fault on this keyboard. Waldorf has excelled itself once again, taking a great product and making it greater still. The added sample memory and keyboard really place this with the big boys.

It seems that, once in a while, the villain is deservedly victorious.

Now hear what the Blofeld Keyboard can do: