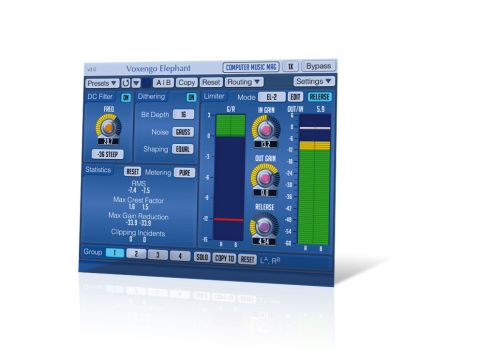 A mammoth update to this already-superb limiter proves that there's certainly no junk in Voxengo's trunk.

The kind of digital 'maximising' limiters that came to the fore in the 1990s were something of a revelation in mastering, enabling one to increase the apparent level of a mixdown without unduly comprising its sound quality.

Voxengo's Elephant limiter has earned a reputation as one of the finest such tools available today, and proven its worth as a mixing processor too.

Now version 3 is here, with the most obvious enhancement being Voxengo's new interface style - last seen with VariSaturator - although the improvements are more than merely skin deep. Elephant is now Mac-compatible, too.

Elephant features ten presets, called modes, the parameters of which can be tinkered with under the hood or not. You then choose between four algorithms, including a clean clipping type.

One of the most notable new additions is the EL UNI algorithm's Knee control, accessible via the Mode Editor. The knee determines the scale of a flexible threshold that will compress quieter sections of the signal at a lower ratio before reaching full-on brickwall limiting at the top. The result is probably the subtlest form of limiting you'll find.

Other mode editing controls determine how transients are dealt with. The only thing we feel is missing here is a wet/dry mix control.

While many mastering limiters might include a DC offset switch, Elephant 3 boasts adjustable filters with no less than 11 slope types and a finely tuneable high-pass cutoff with a range of 1Hz to 100Hz. There's dithering, too, which can operate at bit depths ranging from 6- to 24-bit, and has two noise types and two shaping options.

Voxengo has clearly built this baby to be ready for anything, and to that end Elephant has been expanded to support multi-channel configurations.

For the very highest audio fidelity a linear-phase 8x oversampling algorithm is included. This might not be a practical feature for mix usage due to the increased CPU hit, but for critical applications like mastering, the additional clarity it brings means it's not to be overlooked.

As well as changes to the internal aspects of the limiting effect itself, there have been a number of invaluable interface improvements. The new undo/redo system means you're free to experiment wildly, knowing that you can easily return to the original settings, and there's a slicker preset manager.

Meanwhile, the internal routing panel enables you to set up sidechaining between multiple instances.

You might be forgiven for assuming that Elephant's forte would lie in forcibly squashing audio into shape. Ironically, though, this is a truly refined beast - even gentle, if you want it to be - and it's easy to achieve more transparent gain reduction than with most other virtual limiters.

Listen to a flat breakbeat, and then hear it limited with Elephant 3: