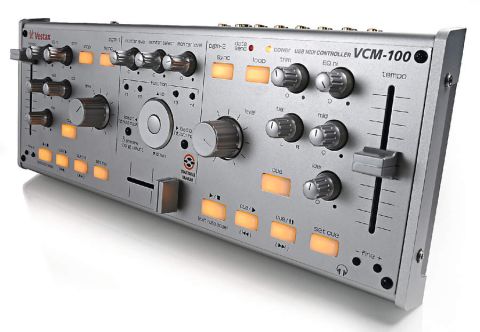 A fine piece of kit for beginners, though there are units that can do the same job but cost considerably less.

The VCM-100 is a small desktop-style DJ controller/USB audio interface that eschews the usual CDJ-style jog wheels and offers a simple rotary-style mixer. Right away, this makes it an unusual beast in the market and one that won´t immediately appeal to DJs who are used to some sort of vinyl emulation when they´re mixing.

The ﬁrst thing you notice when you lift the unit from its box is its weight. The robust metal case seems extremely tough, and all the faders and rotaries look and feel great. There are long pitch sliders and a loose-feel crossfader.

One slight design-related annoyance rears its head when you flip the unit around. All of the phono inputs and outputs look identical, so plugging in this unit in a dark club could potentially be awkward. Pack a torch.

The headphone output on the front is essentially the same audio output as the rear 'booth' output, so separate volume control of these two is not possible as they're both controlled via the same 'monitor level'. Although this is strange, it´s not really an issue.

Installing the unit on our Vista-equipped laptop was a long but painless process. Drivers were installed for the ESI-powered interface and a strange sequence of plugging and unplugging the USB cable was necessary.

As the VCM-100 is recognised as a MIDI controller, it can be easily assigned to any DJ software, but it seems that the emphasis is on compatibility with Native Instruments Traktor (the unit is currently bundled with a copy of Traktor LE). A TKS template ﬁle for Traktor can be downloaded from the Vestax website and this gets all the controls assigned fairly well, although you will probably want to modify certain assignments to suit your needs.

The audio interface sounds great and comes with stable and low latency drivers.

Sit the VCM-100 in front of a laptop and you´ve got a very neat setup. The optional laptop stand (£60) would be a welcome addition - it puts your notebook in a much more convenient position while tidying up all the cabling underneath the unit - but it's a shame that this costs extra as the VCM-100 is already a pricey product.

Given the relatively high price tag, we would have expected Vestax to go further with this unit. It's pleasant to mix on if you're generally DJing four-to-the-ﬂoor-style beats, with those rotary level faders making for some very smooth transitions.

Cueing tracks without jog wheels is mildly more taxing - you may ﬁnd yourself reaching for the mouse - but because the sync button takes care of all beat-matching, you're free to do more looping and interesting mixing.

We were frustrated, however, by the lack of more creative control options on the unit. It would beneﬁt from additional rotaries and buttons to control the effects and looping options in Traktor, and the three-band EQ rotaries could have been upgraded to four-band to more accurately ﬁt with said software´s interface.

Vestax has got the professional feel spot-on, but it needs to add the features that digital DJs now demand.