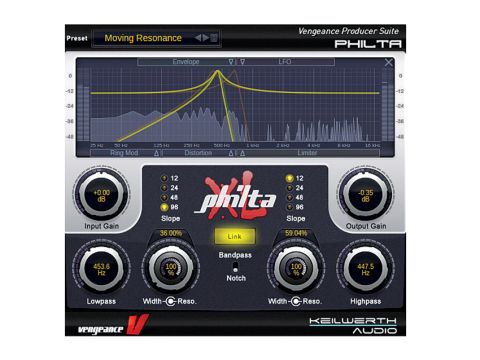 Philta XL lends further credibility to Vengeance-Sound's status as lord of the dance scene. It's a certified banger!

Filters are one of the most fundamental studio effects. Whether used for obvious sweeps, synth patches, sound design or simple mix-sculpting, they are near ubiquitous in the studio.

When we heard that Vengeance-Sound - those purveyors of innovative and powerful dance-centric effects - had released a filter plug-in as part of their Vengeance Producer Suite, we had no idea what to expect. But it's here now and with a name Philta XL, it'd better be pretty damned phat.

The overall design is pretty straightforward. The front panel shows the frequency spectrum in the main window, with two separate but linkable filters: one low-pass and one high-pass. Each can be set to a classic analogue 12dB per octave slope, a powerful 24, a fairly surgical 48 or even an insanely precise 96, as with the recently reviewed Vengeance-Sound Multiband Compressor.

Each filter band offers a cutoff frequency control and another dual-purpose control with Width on the outer ring and Resonance on the inner. Though clearly interconnected, we still find having both of these controls on one dial a little cumbersome from time to time, and would have preferred a different system.

By default, Philta works in a band-pass arrangement, passing frequencies that fall between the high-pass and low-pass filters. However, enable the Notch option and the high-pass becomes a low-pass (and vice versa), so chopping out the middle frequencies instead.

Give it some bite

Topping off the obvious front panel features are main input and output controls and some far-too-oft-overlooked input and output meters. Beyond that, you're going to have to check out the pop-up sub-menus.

First are the envelope and LFO controls, which offer far too much power to cover fully in one review. Despite their power, they're very intuitive, and if you're concerned about overlooking some of their possibilities, the carefully grouped presets are on hand to show you how it's done.

Next up comes the ring modulator section. Again, this is best heard in action, but one of our favourite features here is the Mix control. It allows some exciting sweeps, and like all of Philta's major parameters, it can be automated.

Ring modulators seem to have cropped up more and more on plug-ins in recent years, but after trying it out on a variety of sources, we can vouch that this one is no mere nod to fashion. It can take straight-up filtering and turn it into a sound-mangler's dream, or simply add a little bite and character to help sculpt a mix.

The distortion effect comes next, and this is fit for anything from all-out sonic decimation to helping sounds cut through a mix. On a more creative tip, there's a sample rate reducer that can be linked to the low-pass cutoff, which, as we have already established, can be modulated with an LFO. We can assure you that this is well worth trying.

Finally comes the output limiter. It's a simple affair, and we encountered the same feature on Multiband Compressor. On both plug-ins, it works best with the auto-release disabled.

As with MBC, the limiter really comes into its own when Philta is used on a full mix, but however you use it, you shouldn't just leave it on and forget about it - keep an eye on your input levels to ensure it isn't destroying the dynamics.

In terms of sound, Philta is excellent. It offers a great level of crunch and bite, and though it's not particularly warm in a 'vintage' way, it has bags of character and is perfect for modern productions.

The interaction of the two bands when linked and modulated is particularly impressive, and from a performance perspective, it can function as an incredibly authentic DJ mixer-style filter effect. Naturally, it offers much more customisation than regular DJ effects, but this is probably the best way to describe Philta to deck-spinners.

Anybody who's used an LFO-driven filter will know the kind of whoomping, pumping sounds this can achieve, but the LFO on Philta has clearly been carefully designed to have maximum impact in electronic music.

To this end, the LFO offers a range of shapes and speeds, can be sync'd to the host BPM and can be used to modulate a variety of parameters. Even the amount of modulation and the starting position of the LFO can be adjusted.

The envelope section too offers some amazing possibilities, and perhaps even more of an innovative design. The basic premise is an amplitude-sensitive input that monitors the incoming level and uses this to modulate the cutoff frequencies.

A further Area control defines which part of the frequency spectrum is monitored, and that can be used to tailor the effect to react a specific range, or use one part of the spectrum to trigger control of another.

The Attack and Release controls offer control over the speed of the action, while Strength and Boost determine the intensity of the effect. The whole section is brilliantly implemented.

If we had one wish, it's that the envelope could be MIDI-triggered or perhaps linked to BPM. Overall, though, Philta's modulation system is terrific.

Please sir, I want some more

In the end, it's hard to criticise Philta without sounding rather greedy. It sounds so good and has such cool features that you find yourself hankering to use it on anything that might require a filter, such as when removing hi-hat tails from a kick drum sample.

However, without MIDI envelope triggering and additional envelope controls, it isn't the ideal tool for this task. While we're at it, we reckon an offset delay on the envelope and LFO would be very beneficial too.

But we aren't going to mark it down particularly on this basis - these aren't complaints as such but rather our wish list for a future version.

To sum up, Philta XL is a fantastic plug-in that totally lives up to its heavyweight name. While you've probably already got a filter, this one is more than powerful and tasty-sounding enough to justify its purchase.

The modulation parameters are exciting and effective: they're clearly designed by people who know a thing or two about producing dance music. It's not an essential plug-in, but for most kinds of dance music and creative electronica, you won't regret the modest outlay.

In a crowded market, it more than makes its mark, and for Ableton Live DJs looking to expand their performance arsenal, it is a genuine gift.

Now listen to our audio demos to hear PhiltaXL in action: