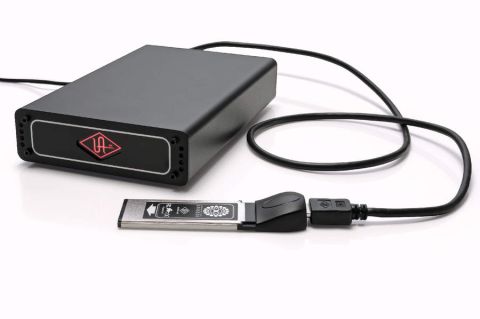 The UAD-Xpander brings the well-regarded plug-in platform to laptop users in a neat and compact package.

Universal Audio has released endless high-quality software emulations of their classic vintage analogue equipment for its UAD-1 PCI cards. With the UAD-Xpander, it´s attempting to bring the technology to a wider user base.

The UAD-Xpander (here tested in its Xpress incarnation) uses the same technology as the UAD-1e but comes in a hard-drive-sized breakout box. This connects to any ExpressCard-equipped laptop via a metre long cable and small ExpressCard/34 Xpander card.

It´s worth noting that the breakout box does require an external (supplied) power adaptor, making this a portable rather than fully mobile system.

The Xpander comes in three flavours: Xpress, Xpert and Xtreme. The Xpander Xpress and Xtreme both come with the same set of core plug-ins: 1176SE - a less processor-intensive version of the great 1176 compressor; Pultec EQP-1A equalizer; RealVerb Pro; CS-1 channel strip and Nigel guitar processor. They come with UA online store vouchers valued at $500 and $1000 respectively.

The Xpander Xtreme, meanwhile, comes with a much larger bundle of 21 plug-ins. IN total, there are currently 28 UAD-1 plug-ins available, including the brand new Precision Buss Compressor and SPL Transient Designer.

Installation was a simple and straightforward affair on our MacBook Pro. Should you be at all nervous about the process, UA also provides a DVD Quick Start Guide that takes you through installation, registration and authorisation of the card and plug-ins. Windows users should be aware that you would need to be running Vista to use the Xpander.

We tested the Xpander using Cubase 4.1 and had no problems at all. We already have two UAD PCI cards in our studio PC, but it was great to have access to some of our favourites in a more compact and portable setting. What´s more, we could detect no difference in resource usage between the PCI and ExpressCard versions.

UA has always excelled when it comes to applying their know-how of the analogue domain to the digital world. Their plug-ins generally fall into two distinct categories - those that emulate specific items of ‘vintage´ kit, and those that provide different types of generic dynamic, EQ or ambient processing.

The range of available vintage plug-ins embraces UA´s own back catalogue of classics - including the 1176, LA-2A and LA-3A - and also features some out-of-production favourites. These include a classic passive EQ from Pultec, the valve and transformer monster that is the Fairchild 670 compressor, the hard-hitting Helios console EQ and the EMT-140 Plate Reverb.

Roland has licensed emulations of its Boss CE-1 chorus, Dimension D Rack and RE-201 Space Echo effects, while Neve has allowed their name to be used on the wonderful Classic Console Bundle. UA also offers optional non-emulated effects in the shape of their Precision range.

The UAD plug-ins are used in the same way as standard native ones. As they use their own processing hardware, a separate Performance Monitor window can be opened to check on the card´s CPU and memory usage.

We found the UAD-Xpander a pleasure to use. The advantage of using the ExpressCard format for high bandwidth communication is that the FireWire and USB ports are left available for audio input/output and MIDI interfacing. UA also sells the UAD Xtenda ($99), which enables the Xpander to be used with a PCI Express-equipped desktop.

If we were being critical, we´d say that while the UAD-1 platform plug-ins excel at emulating real-world kit, there seems to be a gap in the range when it comes to delay- and reverb-based effects. TC Electronic´s rival PowerCore platform has the beautiful sounding VSS3 algorithm (at a price), for which UA´s DreamVerb is no competitor.

However, UA could never be accused of standing still on the software development front, and may well be developing new plug-ins of this type right now.