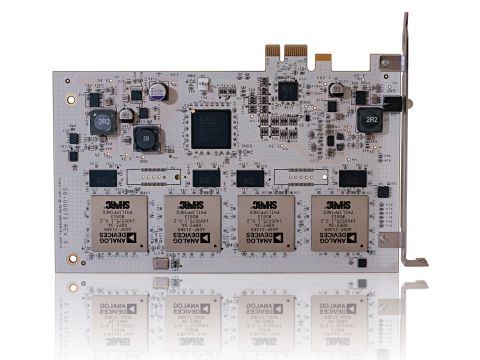 The UAD-2 is perfect for power-hungry plug-in users, particularly the Quad version. It might just rule the world.

The UAD-2 is, as its name suggests, the successor to the UAD-1, and puts considerably more lead in its pencil.

Three cards are available: Solo, Duo and Quad. The Solo card boasts performance at 2.5 times the level of the original, the Duo at five times and the Quad at a whopping ten times.

This hardware shift coincides with Universal Audio's move to Version 5 of its software, so installing the new card means a radical overhaul to any existing system. One cautionary note here - UAD-2 is not currently RTAS-compatible with Version 5 of the software, though it will be in a later update.

Over the course of this review, we'll be focusing on two main things - the install and update process and, of course, the relative level of performance afforded by the new hardware (our machine has a Quad installed). First things first, though, let's debunk a few myths, rumours and concerns.

At present, there are no new plug-ins for UAD-2. Universal Audio has wisely decided to launch this hardware with an existing 'known' set of processors, rather than trying to throw new ones into the mix. That said, several new treats are planned before the end of the year.

It should also be said that you are perfectly able to run a UAD-2 card alongside a UAD-1 card and, if you own a moderately-well or completely stocked UAD-1, you'd be advised to do precisely this at the moment. This is because seven of the existing UAD plug-ins are not yet UAD-2 compatible.

Specifically, we're talking about four plug-ins from the Precision range (Maximiser, De-Esser, Buss Compressor and Enhancer kHz), as well as the Roland RE-201, the SPL Transient Designer and the VCA VU Compressor.

These plug-ins will continue to work, despite the install of software Version 5, via your UAD-1 card, and the porting process to make these available for UAD-2 isn't expected to take too long.

Install is much as it was with UAD-1: load up the new software, power down, open your computer up and fit in the card.

The Quad card features four pristine SHARC processors and an LED on the 'visible' panel at your computer's rear. This flashes between red and green during power-up before settling on green once your machine has booted.

Version 5 of the software dramatically updates the appearance of UA's Meter and Control Panel, the trusty application which enables authorisation and configuration of the available plug-ins. Those you do own will require a new authorisation file in order to work with UAD-2, so there's a slightly heart-stopping moment when, at first boot, you see the full list of your plug-ins with 'Activate Demo' prompts next to them.

However, UA is one step ahead. Via the Plug-Ins drop-down menu, you can jump to the UA website via the Authorize Plug-In's button and, from here, you can crossgrade your plug-ins for use with the UAD-2 hardware. This takes a few minutes but, in due course, provides you with a brand new authorisation code which successfully completes the crossgrade process when it's dragged to the UAD Control Panel.

That's the good news. The bad news is that, while crossgrading is currently free, from January 1 2009, it will cost you $25 per plug-in (up to a maximum of $250) to switch your plug-ins from UAD-1 to UAD-2. For loyal owners of existing hardware who have invested in the UAD system, but who can't or don't want to update in the next three months, that's going to sting a little.

However, remember that you don't have to crossgrade - as long as you're happy to run your existing suite of plug-ins via your UAD-1 card.

Once you're fully installed and crossgraded, the new UAD Control Panel comes into its own. It shows you a full list of your plug-ins, and enables you to choose which of these you'd like to run from which of your cards. So if you want to spread the load, you can.

Via other tabs, it's also possible to deliberately limit DSP load on your card, check your card's status and, most crucially, see how the card is performing via its own DSP meters.

To test the power of the new card, we ran an A-B test with the Neve 88RS inserted into as many channel strips as possible, first running on our UAD-1 card and then on the UAD-2 Quad. We engaged both the compressor and EQ sections of the 88RS and managed to run 16 instances of this plug-in on our UAD-1 before it had had enough.

Once switched to the UAD-2 card, with 96 instances running, we'd maxed out the first three chips but had only eaten into half of the fourth chip. We managed to run a whopping 112 88RSs on UAD-2 before it had had enough.

These tests were carried out with Logic playing back the same audio loop on each of these tracks. Effectively, this means that a dual 2.3GHz G5 PowerMac can become a virtual 112-channel Neve 88RS mixer. UA claims that more powerful computers could run up to a maximum of 128 88RSs per card.

We should also say that UAD plug-ins can run in low latency mode with the release of UAD-2, which means that they can be used through software monitoring while recording.

If you're a fully paid-up UAD devotee, the switch to UAD-2 can only be exciting. Yes, it's an outlay for a card, with the all-guns-blazing Quad a serious investment, but this switch will ensure the future of the UAD platform for the foreseeable future.

It's now possible to turn your DAW into a full Neve console, for a fraction of the cost of a real desk.

Performance is more than impressive and the preparation work UA has done to ensure the install and crossgrade is smooth and error-free is commendable. Very, very good.