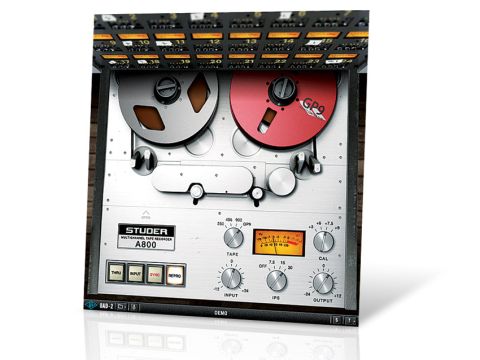 As a widespread recording medium, analogue tape is pretty much dead and buried. But despite its inconvenience and expense, it really can add both the glue and sheen needed to round off your sound and make your mixes sound 'like a record'. No wonder, then, that tape still has its diehard fans.

Based on Studer's classic 2-inch multitrack machine, Universal Audio's official Studer A800 plug-in aims to give you flexible (and creative) access to many of the capabilities of the original. These include tape speed, record bias, HF pre-emphasis, tape formulation, operating level, playback EQ and input/output levels.

UA don't cut corners, and here they've modelled the complete analogue signal path, making available sync, repro and input monitoring options, just like the real machine. The plug-in can run in both calibrated and uncalibrated modes, allowing you to take full advantage of the original circuit features mentioned above.

Using this plug-in requires no prior understanding of how analogue recording works, but a bit of know-how may help you get the most from it. To get the most dynamic range from tape, you need to record at a sufficiently high level so that the tape noise is less significant.

However, this in turn may result in subtle saturation of the signal, particularly for transient sounds such as drums. This trade-off is affected considerably by the tape formulation you use, as these are all designed to handle different operating levels. The most recent, GP9, tolerates much higher levels.

Further influencing factors include the tape speed (slower has a different bass response but more tape hiss) and the choice of hearing the record (sync) or playback (repro) head.

The first thing you'll notice when launching the plug-in is that the reels spin in accordance with the current tape speed. If you find this a gimmick too far, clicking the IPS label disables it.

Next up, clicking the A800 name badge reveals the additional calibration controls - bias, EQ and so on. In this mode, and with the Auto Calibration turned on, it's easy to see how under-the-hood settings such as bias, HF pre-emphasis and playback EQ change according to the selected tape formulation and speed.

However, for 7.5 and 15 IPS, UA have also included CCIR and NAB EQ options, and these influence the EQ response as well. The EQ curves also affect the type of hum that's introduced - 60Hz for NAB, 50Hz for CCIR.

Finally, you'll find a level control for hiss. In use, our UAD-2 Solo card managed a combination of five mono and three stereo instances at 44.1kHz - enough for the significant aspects of a drum kit.

The presets cover many common setups and sound surprisingly varied. Those familiar with tape's speed-dependent low-frequency response (or 'head bump') will spot that straight away.

However, the real power here is to go beyond the simple 'tape deck' emulator. This can mean driving sounds hard, eliminating or boosting noise and hum, or biasing in extreme ways.

You can do this either globally using the gang function (where editing an A800 instance updates parameters on the rest), or on a track-by-track basis. Using considerable under-biasing gave us some fantastic break-up effects.

Purists will note that there are some things the plug-in doesn't replicate, such as print through, adjacent track bleed and dodgy edge tracks - but these are mostly undesirable traits anyhow. More pertinently, you will need a powerful UAD-2 card (or several cards) to run many instances.

However, the Studer A800 plug-in manages to deliver the tone-shaping capabilities of multitrack tape in a convincing way, and is far more flexible than the original hardware, as you can fiddle with settings on a whim.

For those already working in the box and for whom analogue tracking isn't an option, it's a highly desirable - albeit pricey - release from UA, and one of their very best efforts to date, which really is saying something.

Now listen to our audio demo to hear the plug-in in action: