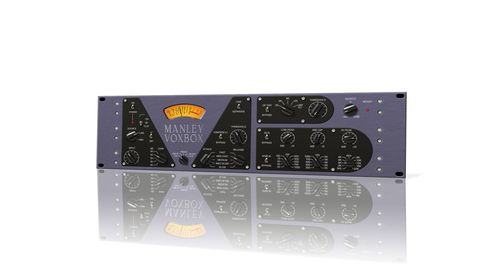 An excellent emulation of some top-flight hardware, Voxbox has enough applications to make its price tag worthwhile.

Universal Audio has emulated every nook and cranny of it in this new emulation, for use with the UAD-2 system. Apollo users will be able to use it as a Unison plugin to imprint their recordings with the impedance and gain structure of the original unit.

The four main sections are valve preamp, optical compressor, passive EQ and optical de-esser/limiter, with Input and Output controls handling overall level duties. Much like the hardware, the compressor comes after the Input trim but before the pre-amp.

Meanwhile, the VU meter has five positions, showing compressor gain reduction and average loudness at four points: line in, preamp out, EQ out and de-esser/limiter out. Finally, there's an optional transformer stage (XMFR), emulating the balanced and unbalanced outputs of the hardware.

One further development incorporated into v8.7 concerns the early Roland and Boss plugins (Dimension D, RE-201 Space Echo and CE-1 Chorus Ensemble). Following the end of UA's licensing deal with Roland (the plugins have been unavailable to purchase for almost a year), it has re-launched all three with new graphics.

The Galaxy Tape Echo, Studio D Chorus and Brigade Chorus are available to buy individually and as the Classic FX Bundle, and are sonically identical to the Roland/Boss plugins. Existing owners will find the plugins added to their account for free, although the originals are still included to provide compatibility with old sessions.

Flavour of the month

Voxbox delivers pristine sonics, but there are some behavioural subtleties worth mentioning. The optical compressor has five Attack and five Release options (labelled Fast to Slow), and the Release time slows as gain reduction tails off. There's also some interaction between Attack and Release times.

UA suggests uses for the Release settings, including Medium Slow for vocals. Even so, for modern upfront vocals or punchy bass, Fast settings for both Attack and Release work incredibly well, while Medium settings are great for subtle glue on overall mixes.

Next up, the Preamp. As you increase Gain it introduces harmonic distortions, but these are primarily 2nd harmonics and are subtle, so don't expect extreme colouration.

As for the three-band Passive EQ, two bands (Low Peak and Hi Peak) provide peaking boost only, and collectively deliver 22 stepped frequencies across the full frequency range (20Hz to 20kHz). The third band is a mid- frequency Dip with 11 frequencies (200Hz to 7kHz).

Gain boost or cut for the three bands goes up to 10dB, consistent across all settings. However, slightly inconsistent are bandwidths - we particularly like the sharpness of the 8kHz and 10kHz boost settings, and, by contrast, the broadness of the peak boost for 12kHz and up.

With four fixed frequencies, the Voxbox De-esser is incredibly straightforward. For vocal de-essing, the 6kHz and 9kHz work well, while the 12kHz setting reigns in excessive highs on material such as cymbals. The 3kHz option is useful for ducking midrange harshness in vocals and guitars.

Compression works well across all frequencies, even with heavy gain reduction. In its final setting, the De-esser becomes an LA-2A-style 10:1 opto Limiter, allowing you to both compress and limit at the same time.

There's plenty to like here, even allowing for the 56% per SHARC chip hit for a single stereo instance. The decision to stick with the fixed signal flow of the original hardware is a missed opportunity (albeit consistent with UA's other emulations). Overall, the Voxbox is an excellent addition to the UAD line up, great for recording and mixing a broad range of instruments.