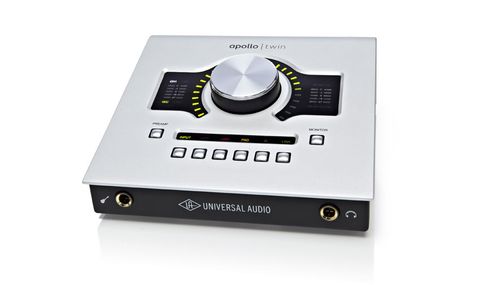 A great addition to the Apollo range with sensible compromises to reach a more affordable price point.

Universal Audio's Digital department, as a developer and distributor of high quality audio-processing plug-ins, has become so successful that it's easy to forget that the company has a long and established history as a manufacturer of hardware.

As a 'front-end' to its plug-in collection, this balance has been redressed in recent years with, firstly, its Satellite range and, more recently, the Apollo series of Mac-only audio interfaces. These feature hybrid functionality: they provide a platform to host UAD plug-ins, and also feature high-quality audio interfacing, so the Apollo range covers you from the recording to the mix stage.

However, until now, Apollo's flagship interfaces have featured a flagship price, leaving some potential users craving a 'smaller' version of the Apollo concept for a comparably lower cost. Enter the Apollo Twin.

Across UAD's range, devices featuring Duo (two) and Quad (four) cards double or quadruple the number of instances of UAD plug-ins which can be run simultaneously on the Solo card. There is no Quad option for the Apollo Twin at present, so you must choose from Solo or Duo options. Thereafter, the Apollo Twin hardware is identical, regardless of your choice.

To get up and running, you need to put the power supply together first, as the box contains adaptors for assorted geographical territories. This is fiddly and you also need to buy a Thunderbolt cable as, frustratingly, one isn't supplied with the Twin.

Thereafter, however, things get much simpler. There's a dedicated launch page on Universal Audio's website which contains a download driver to the UAD software. Once this is installed, the installer will also check for firmware updates, download them and it will prompt you to restart.

Finally, you can buy plug-ins directly from UAD's website, or initiate a set of 14-day demos for the complete range, providing the perfect try-before-you-buy platform. With dedicated videos to explain installation for all of the major workstations, Universal Audio get full marks for making this process painless.

The Twin features an attractive wedge-shaped design which follows other interfaces in its MacBook Pro-friendly brushed chrome exterior. On the back panel, you'll find most of the physical connection ports.

These include two Mic/Line combi ports, 1/4-inch main monitor outputs and a separate pair of outputs (3-4) too. Next to these are the power inlet and Thunderbolt connection port, whilst an Optical In port provides eight digital input channels. These ports are augmented along the front edge by a Hi-Z instrument input and a headphone socket.

The upper panel is where the action happens and is dominated by a rotary dial, around which a generous number of LEDs lie, which are flanked by further LED ladders on either side and a second, narrow screen with buttons below.

Once you've connected a mic or line level source to one of the inputs, use the Preamp button to select the relevant channel, before using one of the buttons at the bottom to toggle between Mic and Line sources.

The rotary dial then acts as a Gain control, whilst you can also activate phantom power, enable a low-pass filter, engage a pad, invert the input's phase or link the twin inputs to a single set of controls for stereo recording.

If you're working in mono or dual mono-modes, simply toggle the Preamp button across the second input to repeat these processes. Pressing the Monitor button on the right moves between the Main Output Level and the Headphone level and, again, the multi-purpose rotary can then be used to select a level, with the surrounding LEDs displaying your settings.

The preamp stage matches the design of the other interfaces in the Apollo range and, for many, this will be as key a feature as the capacity to run UAD plug-ins. The emulation process doesn't only extend to UAD effects but also to the design of the inputs which, via Universal Audio's Unison technology, mimic the behaviour of classic tube and solid-state devices, copying their characteristics to provide extraordinarily high-quality results.

Enhanced by up to 24-bit, 192kHz audio resolution, this is certainly the best-sounding of the interfaces this writer has reviewed around this price point. Alongside the software used to host and manage your UAD plug-ins, Apollo Twin's installer download also contains the Console software. Processing is carried out with near-zero latency, thanks to the Twin's hosting of the UAD plug-ins itself and, as crucially, the ground-breaking speed of its Thunderbolt connector.

The sonic capabilities here match those of the more fully-spec'd Apollo interfaces with the main compromise being the number of audio inputs and outputs. So, if you're wanting to track a whole band in real time, two physical inputs might prove restrictive.

However, if you're looking to overdub parts in mono or stereo, or want to work with a vocalist whose simultaneous recording channel requirements are smaller, there's nothing not to love about this interface. Similarly, if you want to run up to 100 UAD plug-ins at once, the Twin's lack of a Quad option might prompt you to consider one of the larger interfaces; otherwise, the Solo or Duo options should certainly cover your processing needs.