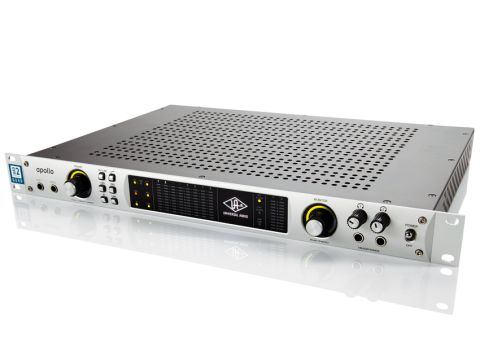 A top-quality audio interface with the best DSP plug-in set on the market.

The Universal Audio Apollo shows its quality straight out of the box: from the reliably solid casing, through the 'click' of the relays when switching preamp functions, to the stepped front panel controls with level indicator LED rings.

Though only 1U in height, the Apollo is rack-hoggingly deep, so if you want to go mobile make sure the rack case is suitably proportioned to allow clearance for the XLRs and 1/4-inch plugs at the rear. Interface sockets, particularly 1/4-inch jacks, can often feel unnervingly wobbly, but UA has used premium connectors, allaying any fears about long-term wear and tear.

"We wouldn't hesitate to recommend the Apollo as a high quality FireWire (and soon to be Thunderbolt) interface on the basis of its sound quality and tracking/mixing feature set."

Keeping all but the headphone and Hi-Z connections at the rear of the unit keeps things tidy in the rack and provides ample real estate for the impressive LED panel.

Installation is simple - it takes longer to register for the UAD plug-ins (you get some dosh to spend in the UA store). The next task is to set up your FireWire bus bandwidth allocation, an important step if you want to maximise Apollo/DAW performance.

The UAD Meter & Control Panel provides a constant monitor of DSP, FireWire bandwidth and CPU loading as well as being just a quick hop from adjusting the allocations.

The front panel preamp and monitor knobs can be pressed to select the preamp channel and mute the monitor output, respectively. To the left of the preamp control are the two Hi-Z instrument 1/4-inch TS jacks that automatically change the input function of channels 1 and 2 when a plug is inserted. To the right of the preamp knob are the six preamp function buttons: Mic/Line selection, low-cut filter, +48V, Pad (20dB), polarity/phase inversion and stereo channel linking (1 & 2, 3 & 4).

The only other LEDs are for UAD link status and clock source (internal or external; the latter turns red when no usable clock is present). To the right of the monitor knob are the two headphone jacks and level controls as well as the chunky power switch.

This simple armoury of controls and feedback covers the most important functions the user will regularly need and does so without being fiddly or hard to see.

Though there's little info about the Thunderbolt expansion card (UA says it will be ready to ship in the first half of 2012... so any day?), it's clear that an increase in the capabilities of the Apollo will result as Thunderbolt, at 10GB/s, is 12.5 times faster than FireWire 800. What is conspicuous by its absence here is MIDI, so if you need it you'll have to get a separate device, probably on USB.

There are two UAD-2 options: Duo or Quad. We reviewed the Quad, which is just over £500 more than the Duo - or the difference between the Duo and Quad PCIe/FireWire UAD-2 units.

Obviously, the Quad gives you twice as much processing power, which means twice as many plug-in instances. We set the FireWire bandwidth allocation for UAD to the recommended 70% and it happily ran 47 plug-ins (1176LN, 1176SE, LA2A and Pultec EQs) within the DAW, with a buffer setting of 128 samples (6ms) running at 44.1kHz sample rate. There was still headroom on the FireWire buss so no glitches or dropouts were evident.

Doubling the sample rate halved the number of plug-ins that could be used. More can be used within the Console as they don't rely on the FireWire buss, and the UAD-2 DSP usage meter will tell you when you're reaching the limit: with just 1176s, LA2As and Pultecs, we managed to get well over 60 plug-ins on the insert slots to reach 50% DSP usage, leaving 50% for the DAW.

The main software component of the Apollo is the Console, an 18-input mixer for the physical inputs augmented by two stereo aux channels, monitor controls/metering and DSP usage meters.

The first four input channels carry controls for the functions available on the front panel (+48V, Mic/Line, low-cut filter, etc) as well as a numerical reference of the input gain. The remaining four analogue inputs have gain range controls for switching between +4dBu and -10dBV reference levels.

Channels can be linked in pairs to create single stereo channels, with the graphic adjusting to reflect this. The aux channels also possess four plug-in insert slots and can be routed to any physical output.

Two Console functions really impress. First, there's a switch to place the input channel insert effects in the monitor path or the record path, thus enabling tracking through the UAD-2 plug-ins; the latency of the plug-ins within Console is 1.1ms, even with all four insert slots used.

Second, the S/PDIF channel(s) have a sample rate conversion switch so that a differing input rate can be monitored/recorded, a function we've occasionally found useful.

The overall settings for the Console facilitate full undo/redo for mixer settings, display options (always on top, close plug-in editors, etc), reference levels for the eight analogue outputs (+4dBu or -10dBV), mirroring of the monitor output onto the S/PDIF output (very useful), global sample rate clock source (internal, Wordclock, ADAT or S/PDIF) and an 'identify' button so your Apollo flashes when you're using more than one - yes, someone, somewhere, will have more than one.

The Console can eat up screen space (we put it on its own desktop in OS X Lion) so there's an option to reduce the input channels displayed by type (analogue, ADAT and S/PDIF).

But, more usefully, the main Console functions can be accessed via a plug-in in your DAW called 'Console Recall' - which features the monitor controls, metering, headphone mix sources, insert effects placement and setup recall. This really keeps things neat and tidy when working solely in the DAW, especially on a laptop screen.

The Apollo doesn't feature the kind of matrix routing that can be found in other DSP-based interfaces, so if convoluted routing is a major feature of your interface needs then this could be a problem. That said, most DAWs feature multiple routing paths for channels.

Sound quality can be such a subjective matter, but we defy anyone to find fault with the sound of the Apollo - particularly with regard to its price and the competition. Firstly, the mic preamps are very good indeed, and despite only producing 65dB of gain the noise floor is low enough to allow digital gain make-up and quiet enough for most delicate sources and old ribbon mics.

The preamps are clear and balanced, with excellent transient response for picking out high frequency detail that all too often gets damped and phase-shifted beyond professional usability by cheap interface designs.

The same transparent and dynamic clarity is in evidence with the JFET Hi-Z preamps and line input/output amps, making Apollo the kind of unit for which adding higher quality converters is not an early consideration. The conversion is obviously playing a quietly significant role here and it compares very favourably with the high-end AD/DA converters in our setup (Apogee and Lavry).

As is always the case with these clearly subjective tests, the differences between good quality converters are subtle at best. We'd be more than happy to work with the Apollo alone if we didn't need more channels and preamps (the ADAT and S/PDIF means you can add in your sparkly favourites).

As a final addition, we've found recording DI guitar and bass with UAD-2 plug-ins on the input monitor channel (and often in the recorded path) makes a huge difference to the pleasure derived and quality achieved. And the headphones sound great, with enough level to do lasting hearing damage - although, please don't.

On the whole, all DAWs sound the same (we know, there's the never-ending digital summing argument) so the interface is going to be your most significant limiting factor for sound quality, alongside your monitors. If you can afford it, then, we wouldn't hesitate to recommend the Apollo as a high quality FireWire (and soon to be Thunderbolt) interface on the basis of its sound quality and tracking/mixing feature set.

Our only qualm is the lack of MIDI - something many of us rely on - and that the Apollo is currently Mac-only; Windows 7 support is planned for summer 2012.

If you're also in the market for DSP-based plug-ins then it's a no-brainer - the UAD plug-ins are market leaders for good reason, and considering the cost of either Duo or Quad UAD-2 PCIe/FireWire solutions, the Apollo represents a real saving. An equivalent FireWire interface is going to cost more than £1,000, so adding in the most basic UAD-2 Duo package will still be more than the Apollo at street price, and it won't come in a single 1U rack unit.

Yep, all the fanfare in January was justified, because the Apollo is really rather magnificent.