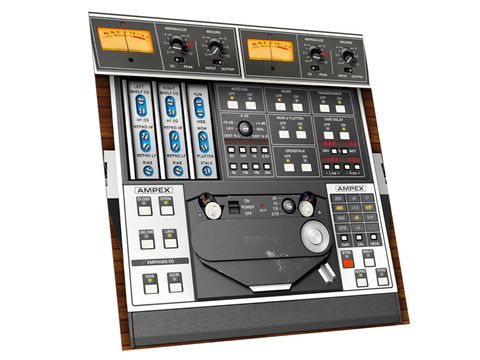 Adds warmth, colour and a classic sound to your mastered mixes. Another great UAD-2 plug.

While some model numbers scattered through recording history prompt excited whispers - 1176, LA2A, etc - you might be forgiven for not immediately recognising the name ATR-102.

Released in 1976, Ampex's two-track tape machine became an instant hit, however, and has been afforded 'classic' status as it has become a solid-gold choice for those looking to mix/master their music to tape.

It's no exaggeration to say that thousands of records have been printed to this machine, whose distinctive sound went on to prompt the well-used studio phrase 'now it sounds like a record'.

Following on from UAD's success with their Studer A800 tape emulating plug-in earlier this year, Version 6 of their software is now available with the ATR-102 its flagship plug-in, which is compatible with all UAD-2 hardware.

UAD's advice is to insert this plug-in as the penultimate processor in your output channel before your brickwall limiter, so that it works its magic after EQ and compression stages (assuming these are being used).

How prominently the sound of the tape features is most dependent on the tape speed controls with lower values providing a more obviously saturated sound, as you'd expect.

As with UAD's Studer A800 emulation, it's possible to experiment with four different emulated tape types too, with a matrix in the bottom right hand corner allowing you to set up Tape type, Calibration and your choice of tape-head size with one-inch, half-inch and quarter-inch options.

These settings alone allow you to achieve anything from subtle warmth to rich, lo-fi distortion but there's plenty more besides. In 'default view', the remaining controls let you select one of four signal path modes - Sync, Repro, Input or Thru - 'Link/Unlink' the channels for matched or independent left/right control and set Emphasis EQ response.

Traditionally, emphasis values and hum frequencies varied between the US and Europe, so both 'NAB' and 'CCIR' EQ responses are modelled here.

Beyond these controls, it's possible to go further still by clicking the 'Open' button, which replaces the tape reels in the GUI to provide an extended set of controls. From left to right, these begin with manual calibration of the plug-in's EQ response while, next to these, you can adjust Hum, Hiss, Wow, Flutter and Crosstalk (XTalk) values.

If you prefer to master without these additional signal degraders, they all have manual bypass switches further to the right. Also, you can control both your desired distortion levels and add Tape Delay with independent values for the left and right channels, both of which encourage more creative use than its 'mastering remit' suggests.

This combination of modelled features and additional controls provides flexibility and enhanced sonic possibilities. Most importantly though, how is the sound? Completely gorgeous is the answer. Even for those making crystal-clear, digitally transparent tracks, the ATR-102 brings a depth and warmth which complements and enriches any material you can throw at it.

At $349, this isn't cheap but it's tons cheaper and considerably more hassle-free than trying to source and operate the hardware it models and it represents another smash hit for the UAD platform.