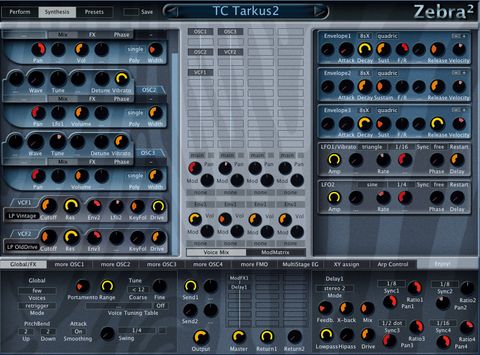 Zebra 2 is a joy to behold. If you're into soft synths, you owe it to yourself to check it out.

Zebra 2 is a powerful soft synth with impressive capabilities

You also get a freebie soft synth called Zebralette

Zebra 2 has a superb selection of presets

Some synthesizers are household names (relatively speaking). You'll find them piled high on retailers' shelves, and their developers spend loads of cash on marketing.

Others, however, have a much lower profile and have to be actively sought out. Initially favoured only by those in the know, their popularity gradually widens via word of mouth. You won't find these products in your local music store - they exist slightly beneath the radar.

Zebra is a perfect case in point. Urs Heckmann (the main man at u-he) began by developing products for discerning Mac users, but such was the buzz surrounding the first version of Zebra that a PC version was all but inevitable.

And now it's here: Zebra 2 is cross-platform and supports the AU and VST formats. Furthermore, MacIntel owners will be glad to know that it's a Universal Binary, too.

For those who missed it first time around, Zebra is a 'wireless' modular synthesizer that combines a variety of synthesis techniques under one roof.

Though it's primarily fueled by subtractive analogue synthesis features, intrepid explorers will also discover FM and additive elements hiding beneath the user interface.

Its flexibility means that it's capable of producing richer, more complex sounds than you'll get from a standard subtractive analogue emulation.

Installation is as easy as it gets - it's simply a matter of copying the plug-in files into the appropriate folders on your hard drive.

It should be noted that the main Zebra synth is but one of three plug-ins that comprise the package, the other two being the nifty Zebralette and the ZRev reverb plug-in (see the Bringing up baby boxout for more).

These might be free bonuses, but they're still of the quality we've come to expect from u-he. When you open Zebra 2 for the first time, you have to enter your name and a series of numbers.

That's all there is to the copy protection, but don't even think about using an unauthorised copy: u-he have devised something rather special for the bootleggers - if you install a dodgy copy of Zebra 2, the software's interface will eventually start to melt away in front of you!

Technically speaking, Zebra 2 is semi-modular. Although the included modules can be installed and patched as you like, there is a limit to how many of each you can use.

However, when you consider that you can load up to four oscillators and four FM oscillators, four of each style of envelope generator and four LFOs, there's plenty of sonic power on offer. The oscillators offer full waveshaping and up to 16 user-definable waves.

Additionally, there's a Spectral Editor that throws additive synthesis (with an unlimited number of waveforms) into the works. Once you've shaped your waves to taste, you can drop in up to four different filters with which to chip away at them.

There are 19 filter types to be had, and all of the usual suspects are included. In fact, there are nine different low-pass filters, not to mention comb filtering, ring modulation and more. We should also mention that Zebra 2 sports no less than 28 modulation sources.

These include the LFOs, obviously, but more importantly, multistage envelope generators that can be synced to the host sequencer's tempo. If you feel more inclined to use traditional ADSR-style envelopes, there's a quartet of those too.

Other key features include flexible effects processors and a modulation matrix. Predictably, one of the Play Modes is an arpeggiator, and there are also legato, polyphonic and step sequencer modes.

We simply don't have the space to describe all of Zebra 2's many magnificent tools, but we have to give a special mention to the supplied preset patches.

There are hundreds of them in the package and most of them are a cut above what we're used to finding in a factory bank.

Some of the patches are of the 'song on a key' variety, while others are more utilitarian. Most importantly, a significant number of them inspired lengthy jam sessions during the review process.

In fact, we were having so much fun that we almost missed our print deadline! Put bluntly, Zebra 2 kicks some serious stripey ass - we were hard-pressed to find anything wrong with the thing at all.

The sound is superb - it easily matches (and usually exceeds) almost any other synth you could name. Whether you're looking for punchy, analogue basses or swirling, evolving pads, this is a powerful yet intuitive solution that's as simple or as complex as you want it to be.

Our only minor grumble concerns the lack of a dedicated manual; we like u-he's ever-expanding instructional blog, but it isn't much good for people who keep their DAWs offline.

This slight reservation aside, Zebra 2 is a masterpiece, and at just under two hundred bucks, it's thoroughly deserving of full marks.