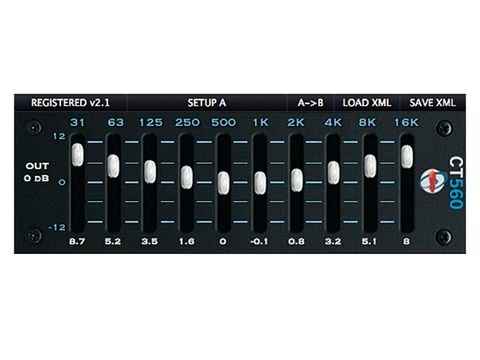 A VST/AU/RTAS plug-in emulation of the famous API 560 console EQ, ClassicTone-560 is powered by impulse responses from an actual 560.

As visually unassuming as the original hardware, this 10-band graphic EQ offers preset load and save buttons, A/B comparison and output gain.

Of the band sliders, they're set an octave apart from each other andcan be cut or boosted by up to 12dB. The proportional Q design progressively narrows each band as the boost/cut isincreased, up to the sharpest slope of 12dB/octave.

ClassicTone-560 isn't meant forhigh-precision surgical frequency-tweaking, but rather for broad-spectrum adjustment of full mixes, drum busses, guitars, basses and other electric/acoustic instruments - all of which it handles with effortless musicality and cohesion.