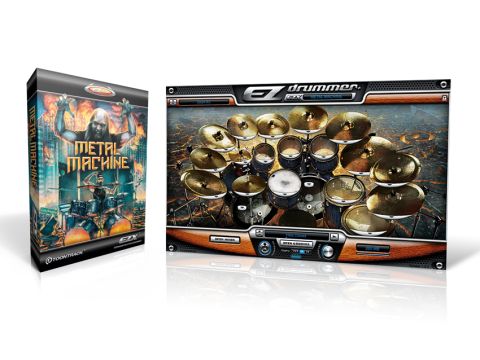 The king of virtual metal kits? It could well be…

No one could accuse Toontrack of neglecting metal-mad users of their virtual drum kit software. Since making their name with the then-groundbreaking Drumkit From Hell, they've released Metal Foundry SDX, Metalheads EZX and loads of mixer presets and MIDI grooves.

Heavy metal thrives on excess, though, so why stop there? Indeed, they've only gone and got Andy Sneap to produce their latest metallic masterpiece, Metal Machine EZX.

"Even just playing a few single hits, you can't help but be impressed by the classy sound that emanates forth - it sounds just like something from one of Andy Sneap's commercial productions."

Mr Sneap is perhaps the genre's most in-demand engineer, with metal royalty such as Megadeth, Trivium and Dimmu Borgir among his credits. Here he teams up with ace drummer John Tempesta to record three kits at LA's Henson Recording Studios.

Gear-wise, you get two Tama Starclassic Bubinga kits (different sizes, one with Quilted Sapele wood) and a Ludwig Stainless Steel. There are seven snares, including a good old Black Beauty, a Tama Bell Brass and a Dunnett Titanium.

Cymbals are Zildjian - there are 11, and 10 have an alternate cymbal choice, making 21 in total. There are two sets of hats, too.

Even just playing a few single hits, you can't help but be impressed by the classy sound that emanates forth - it sounds just like something from one of Sneap's commercial productions.

Many of Toontrack's other metal drum kit expansions have a hyped, mid-scooped tone, but there's none of that with Metal Machine EZX; it has a full, rich mid-range with plenty of 'wood' and gutsy punch. It's heavy, man.

The kits sound terrific and thundering in isolation, but they slot into the mix as easily as you'd hope, with just the right amount of top-end crack. The tone is very consistent, which is crucial for metal.

The room sound is spot on, and you get an epic-sounding reverb to blend in the mixer, too. There's good variety between the main kits as well, with the tighter Tamas more suited to high-velocity modern metal, while the looser Ludwig is killer for rock and more groove-based metal.

We like Toontrack's other metal kits, but thisone is really outstanding - not surprising, really, when you consider who produced it.Our only concern is that Mr Sneap may do himself out of a job, since you can now nab his drum sound for just £55!