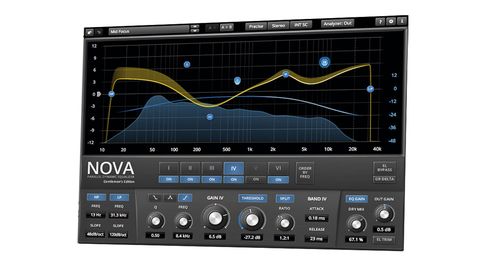 A very well-specified dynamic EQ for the price, Nova GE makes a great introduction to this powerful processing technique.

Dynamic EQ is a problem-solving process, whereby the cut or boost of each frequency band is only applied when the input signal crosses a specified volume threshold.

The classic application is removing overly harsh frequencies from hi-hats in a full mix - applying static EQ would affect the whole mix, but dynamic EQ can be set up to apply reduction only when the hats play, leaving everything else alone.

The latest dynamic EQ on the block, Nova: Gentleman's Edition (VST/AU/AAX), is a more powerful commercial version of the popular free Nova, by Tokyo Dawn Labs.

The incoming audio first passes through high-and low-cut filters, offering a choice of eight slopes from 6dB to a crazy-sharp 120dB. The interface is dominated by its parametric EQ display, featuring three background frequency analysis modes: In, Out and Sidechain (but not In and Out simultaneously, unfortunately).

It's a six-band fully parametric EQ, operating between 10Hz and 40kHz, with a compressor built into each band.

The controls at the bottom of the interface switch to reflect the currently selected band, and when no band is selected, the so-called Wide-Band's controls are displayed.

There are also a number of useful secondary features, including Order By Frequency, which quickly reassigns the band identifier numbers in order of frequency, from low to high; latency- free bypass; wet/dry mix; and optional auto loudness correction, matching the output level to the input level. Nova GE can operate at five levels of computational accuracy, too, from Eco to Insane (including linear modes), and external sidechain control for all dynamics modules allows both problem solving and creative usage.

Finally, Nova GE can be switched between Stereo, sides (Difference), mid (Sum), Left and Right channel operation. It should be noted, however, that this is a global setting.

It's an extraordinarily well equipped plugin for the price - a technical and problem-solving tool, rather than a creative one - and could be a little daunting for inexperienced or less technical producers; but that's not a bad thing, and it's as simple an introduction to dynamic EQ as you'll find.

If you've not got it already, we highly recommend grabbing the free version (Nova), which is functionally identical but has two fewer bands and loses the Insane quality and Linear phase modes, 120dB filters, expansion mode and auto loudness compensation. Chances are, you'll almost immediately want to upgrade to the full GE version.