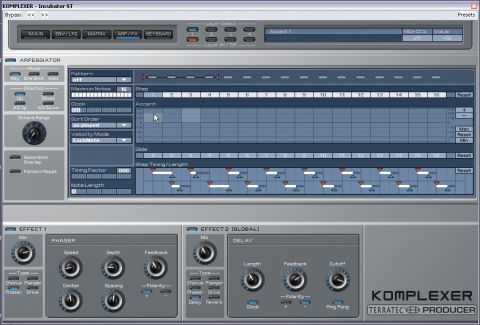 It was a long time coming, but Komplexer was worth the wait. In a bloated market, TerraTec's synth is one of genuine distinction.

When Wolfgang Palm began producing his PPG synthesizers back in the late 70s, little could he have known that they would still be influencing manufacturers almost 30 years later.

It's possible, in fact, to draw a fairly straight development line between Palm's innovative PPG wavetable synthesizers and the new Komplexer plug-in - if you were a fan of his venerable Blue Beasties or Waldorf's PPG-inspired Microwaves, TerraTec's Komplexer will be right up your alley.

Komplexer can certainly sound very similar to the Microwave range of instruments, but it also has a direct connection to another popular Waldorf synth. We're referring here to the Micro Q, the company's diminutive but wildly powerful virtual analogue.

To their credit, TerraTec haven't simply created a 1:1 emulation of the Micro Q, though it should be noted that Komplexer is fully capable of importing Micro Q sounds. That in itself would probably offer some guarantee of success, but as we shall see, Komplexer goes far beyond the Waldorf machine's capabilities.

Komplexer is a Windows-only (for now) synth that's offered in standalone and VST plug-in formats. Delivered on CD with a concise (some might say insubstantial) manual, it installs easily.

The manual does a decent job of getting you started, but Komplexer is… er… complex and beginners might feel they need more guidance. While the differences between Komplexer's wavetables and those in the PPG are explained, it doesn't really tell you anything about wavetable synthesis itself.

Nevertheless, a bit of poking around the interface should get even the greenest synthesist up to speed.

On firing up Komplexer, you're presented with the Keyboard screen. This is a simple interface with a patch browser, a few macro controller knobs and buttons for activating, deactivating and selecting layers.

The assignable macro knobs allow instant access to the most useful parameters and there are tabs for accessing the other, more elaborate interface pages. Some users - particularly those who prefer to let the preset designers do the dirty work - may never need venture beyond this compact display.

Komplexer can be fairly accessible then, but it's to those of us who like to delve deeper that it has the most to offer. A trio of oscillators are on board, two of which offer wavetables.
You get the usual assortment of parameters to play with - you can adjust the tuning, select between waveforms and manipulate the pulse width. Sub oscillation, frequency modulation, bend range and key-tracking controls are also offered.

The first two oscillators offer a wavetable display that can be used for scrolling through the wavetables (each offers the traditional 32 waveforms), while the pulse width parameter doubles as a wave selection controller for the wavetables.

At its heart, Komplexer is effectively a subtractive synthesizer, and this fact is reinforced by the presence of a pair of resonant, multimode filters.

You get the expected low-, high-, band-pass and notch filters and there's a drive control for adding some grit and grime to the proceedings. One nice touch is the ability to apply cutoff FM - a trick used by modular synthesizers.

Of course, there are envelopes and LFOs onboard too. The four envelopes come in ADSR and ADS1DS2R, one-shot and looping varieties, and there are three LFOs with selectable waveforms. These can be synchronised to host tempo and you can customise the waveforms by playing with the contour functions.

What's more, Komplexer offers an Arithmetic modulation source - this can link two 'operands' (sources) using logical functions and then apply the result as a mod source. Heady stuff indeed!
Finally, you're given a pair of effects processors for sweetening everything up. The fare is pretty standard: delay, reverb, chorus and the like. FX1 is available per layer, while FX2 is globally assigned.

If you've still not had your fill of big, fat trance leads, the unison function can thicken things up.

Undeniably, TerraTec have delivered the goods here. Komplexer is a terrific synthesizer that comes packed with functionality and brimming with possibilities.

On the downside, we'd like to see the arpeggiator being offered as a mod source in the matrix and while some of the preset patches are superb (Summa and DocT deserve special mention for their excellent programming), others are bland and redundant. How many trance leads do we really need?

Ultimately, though, Komplexer is a true thoroughbred that will appeal to computer musicians who like their sounds unashamedly electronic. And at just £155, it's a hell of a lot cheaper than a used Microwave.