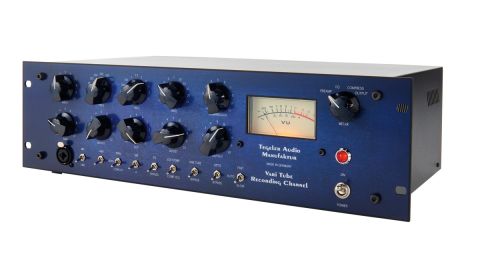 The VTRC-1 is a great channel strip at a sensible price. If you are in the market for one and you like the sound of valves it's well worth checking out.

The VTRC-1 is a big beast at 3U high, with retro styling, and it borrows quite a few ideas from famous old units - Pultec style EQ, Vari Mu and Opto compression - but there are a few simple ideas here that help set it apart.

On the front panel, starting with that row of toggle switches, you get mic/line followed by phantom power and a high-pass filter with settings for 80 and 160Hz.

Next is a phase reverse and an EQ bypass and then you are into the compressor settings. First is a switch to alter the order of the compressor and EQ. Then come switches for Vari Tube and Opto compression and lastly one offering slow or fast timing and an auto function. Vari Tube and Opto can be used together or independently giving you extra options in compression characteristics.

Lastly there is a large VU style meter (which can be switched between Pre, EQ, Compression and Output) and a power switch. The only connector on the front panel is a dual mic/DI input and the Mic input is duplicated on the back along with a dedicated Line input and output XLR.

But it's when you start turning those knobs round that the interesting stuff starts to happen. Used just as a pre you still have a good deal of tonal variation available.

The Tegeler has a transformer for each individual input stage as each has different requirements which is a good idea and not as common as you'd expect. Then there are two knobs: Input and Gain.

Input is the main level control and Gain adds more colour to the tone. It sounds like it is simply pushing the valves harder and it's very effective for fattening things up. Because there is also an output level control, you can get a further variation by pushing the Input level even without using the gain.

Then comes the EQ. This is a Pultec style EQ which borrows a bit from both classic Pultec EQs, the EQP1 and the MEQ5. It has the boost range and frequencies of both units plus a few extras in the really high-end department and a mid range dip too.

The low-end is solid and precise with a real valve warmth. The mid scoop is really wide ranging, from 200Hz to 7kHz and, in conjunction with the HP filter and low-end boost, gives you a surprising amount of low-end control.

The high-end starts at 1.5kHz and goes right the way up to 24kHz. We love the sound of valve midrange. You can get away with more of it than with a transistor EQ, but that is often the case with all midrange and high-end from a well designed valve EQ.

The addition of the Air Band frequencies (20kHz and 24kHz) set this EQ apart from its inspiration, but then it is also far more adaptable because there is such a large range of frequencies available in each band. There are plenty of subtle sweetening options but you can get in there and make radical changes if you want to.

Lastly comes the compressor section. The single Compression knob belies the power of the inclusion of Opto and Vari Tube detection processing, and the fact that you can have them together really means you have three compressors in one.

From a bit of subtle levelling to some really heavy compression, its characteristic is fat and warm and we love the way it holds an instrument or a voice. We were particularly keen on it with electric guitar, especially in the Auto setting.