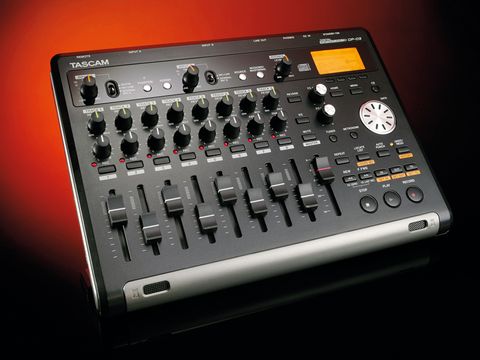 Launched at the start of this year, the DP-03 eight- track digital recorder is the latest in Tascam's long line of Portastudios and, with a roughly A4-sized footprint, is a more compact machine than the DP-02 that it replaces.

Although the DP-03 is small enough to be easily carried to gigs and rehearsals, it's not designed for use out of doors, as it's mains rather than battery-powered, running from a 12V in-line adaptor.

A pair of input channels means that two tracks can be recorded simultaneously (either as two separate mono tracks or in stereo) with the CD-quality audio being stored on removable media in the form of an SD or SDHC card.

A 2Gb card is included with the unit and memory cards of up to 32Gb are supported.

There are two ways to get audio into the DR-03. You can stay self-contained, using the onboard pair of condenser mics, or you can plug external gear in on the rear panel there are a pair of XLR sockets for microphone signals with globally switchable phantom power, and there are also a pair of jack inputs.

Front panel switches for each channel let you choose between the internal mics or the mic/line inputs, plus you also have the choice of switching the line input of channel A to Hi-Z operation to directly take guitar or bass signals.

Where the DP-02 had some insert effects, including a range of amp sims, that could be applied at the input and recorded with the signal, the DP-03 has none, but it does have onboard effects in the form of reverb that can be added to each track.

For the final mix - recorded onto a dedicated master track - you get access to multi-band mastering effects and finished mixes can be put on to an audio CD using the onboard CD burner or can be transferred to a computer via USB 2.0.

Straightforward to use, all of the DP-03's major functions are easily accessed from the frontpanel, with many having dedicated knobs for rapid working.

The mic amps have an excellent clarity to them and sound captured through the onboard mics would be fine for recording gigs, practices, or a live drummer in stereo as a basis for recording the rest of a song.

When recording by yourself you get a metronome to keep time but, unfortunately, no provision for synchronising an external drum machine as on the DP-02. You could, however, import a drum loop, as the USB connection allows wav import as well as the export of individual tracks as wav files.

For guitar, there's an onboard tuner and, while operating the transport buttons is the easiest way to initiate recording, there are facilities to let you keep your hands on your instrument.

You can program automatic punch-in and punch-out points, or you can do the job with an RC-3F footswitch a three-way switch that can also control transport functions.

Track editing facilities - including cutting, copying and pasting audio, and more - let you, for example, compile a solo from several takes, and if you wish to record arrangements that use more than eight tracks there's a bounce facility that even includes bouncing all eight tracks down to one or two.

Each track has a dedicated reverb send, fader and pan-pot, and can have high or low shelving EQ applied, making it possible to create classy finished mixes, with the mastering effects adding a classy final polish.

While Tascam's rival manufacturers might be cramming more features in, with the likes of drum programming, amp sims and DAW control all being common, the company has opted for an elegant approach that places the emphasis firmly on pure recording and mixing with ease of use being paramount.

There's little doubt that the DP-03 will let you create quality recordings and get them on to CD or computer with a minimum of faffing about.