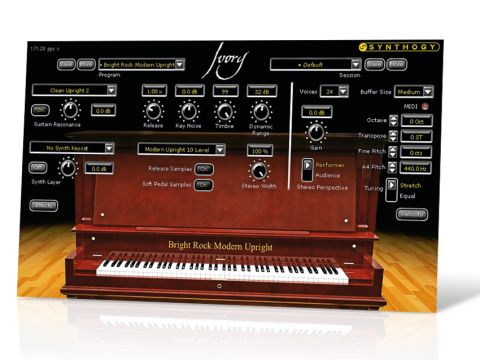 Synthogy has done a fine job here, though whether there's much of a market for virtual uprights remains to be seen.

When Synthogy launched the ­first version of Ivory, it set the standard for all subsequent sampled grand pianos. Since its release in 2004, we've also had the Ivory Italian Grand, and now Ivory Upright Pianos is here.

As its name suggests, this deviates from Synthogy's 'grand' path by bringing together four compact Joannas. We should point out that this isn't just an expansion for existing Ivory owners - it can be used as a standalone or plug-in instrument. What's more, it doesn't have a great deal of direct competition, although NI has just announced that the Upright model from its now discontinued Akoustik Piano can be purchased on its own.

Installation of the 50GB, 5000-sample library takes some time (though you don't have to install all the pianos at once), and before you can start playing, you'll have to transfer your license to an iLok key (which isn't supplied).

Music software may have moved on in the last f­ive years, but Ivory's GUI hasn't. In fact, aside from di­fferent piano graphics, what you see is practically identical to what was o­ffered at v1.0. This will please Ivory veterans, but if you want a more contemporary interface, Upright's basic look and feel may come as a shock.

Still, it's certainly functional - nothing here will confuse. Furthermore, you do a get a new Creaks & Clunks layer that can add a bit of character to your performances. It's possible to have a noise on every key, but this can be a little over the top - the second 'random' layer actually delivers greater realism. Beyond the main page lie the EQ/e­ffects and Velocity settings.

As we mentioned, four separate instruments are included and, unsurprisingly, each sounds distinctly di­fferent. The Modern Upright is the brightest, and the best choice for more contemporary styles, while the Vintage Upright does the business when you're playing classical pieces. The Honky Tonk, meanwhile, is a detuned delight, while the similarly o­ff-key Tack Piano has a tone appropriate for soundtracking the arrival of Al Capone in a gangster movie.

The big question, though, has to be: who is this collection aimed at? Let's be honest: the average computer musician is probably only going to invest in one dedicated piano instrument, and when they do so, they'll almost certainly choose a grand emulation over this.

This being the case, we get the sense that it's targeted at professionals and studio owners who feel they need a piano for every eventuality. If this is the boat you're in, you'll ­find Ivory Upright Pianos to be a worthwhile purchase - everyone else can simply say 'job well done' and move on to more pressing software concerns.