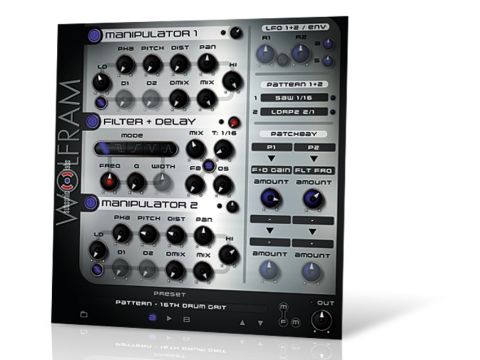 A very capable semimodular effects plug‑in at a fair price.

Subsonic Labs' semimodular multieffects processor Wolfram (VST2/VST3/AU) is a testament to efficient GUI design, taking up just enough real estate to house all of its functions and not a pixel more.

The compact layout is sensible, with the effects taking up the bulk of the allotted area, and LFOs, pattern generators and routing taking up the remaining third. Presets are arranged by category and accessed at the bottom of the interface, and a switch enables A/B comparison.

"While the effects have plenty to offer, it's the modulation system that really brings Wolfram to life."

The effects section is divided into thirds, with the top and bottom partitions devoted to Manipulator effects. These include distortion, lo-fi pitchshift, vintage six-stage phaser and offset delays (useful for flanger, chorus and other effects).

The pitchshifting is particularly welcome, bringing a bit of old-school flavour to modern sounds, and the inclusion of high- and low-pass filters is a nice mix-positioning touch. As with all the effects modules in Wolfram, the controls on offer are minimal, but that seems tobe the point - it's all about focus and fast, intuitive sound-shaping.

Further delay comes next, this time of the more familiar echo variety. Again, there are a smattering of parameters to tweak, including feedback, delay time, mix and offset.

We were very pleased to discover that all of the delay's parameters can be assigned to modulation sources, enabling us to perform some of our favourite delay tricks.

While the effects have plenty to offer, it's the modulation system that really brings Wolfram to life. You get a pair of bare-bones LFOs that can be tempo-synced, and an envelope follower, but it's the dual pattern generators that most impress.

Each of these provides over 100 preset patterns from which to choose, with virtually every possible beat division accounted for. These more than make up for the anaemic LFOs, and, when used in tandem, can provide a bottomless well of churning, turning rhythmic options.

Modulation sources are routed to their destinations via a small, efficient patchbay. Essentially a mini mod matrix with up to four simultaneous source/destination pairings, youcan assign any source (some of which arecombinations - LFO 1+2, for example) to almost any parameter from any module, with the exception of the Pattern Generators and the overall configuration of the modules within each group.

The three effects sections can themselves be switched between four different routing arrangements, although they don't actually move within the GUI.

Wolfram comes with a sizable complement of preset patches, and they don't disappoint. Running the gamut from simple chorusing and echoes to crazed soundtrack-in-a-box atmospherics, we were reminded of Lexicon's classic Vortex effects processor: the more extreme effects have the same otherworldliness that we remember so fondly, albeit without the morphing.

Other highlights include the wicked Fried Space Invaders, which sounds like a walk through an '80s video arcade, and the massive Mothership Landing, which produces a dull throb reminiscent of the ambient effect heard in the engine room ofthe Starship Enterprise.

There are nifty rhythmic patches, too, such as the percolating Syncopate This, with its oddly enhanced low end; and the creepy Ping Pong Noise, which transformed our thumping drum loop into a tense sonar pulse. Very nice.

Wolfram gives you a lot of power for the price. The effects are limited, yes (no reverb, for example), but what you get sounds great and is easily capable of mangling any sound beyond recognition. What it does, it does well.

While more mod slots might be cool, part of what we like about Wolfram is its simple, direct approach. It fits a surprising amount of potential into a small footprint and manages to be manageable and accessible, which encourages you to tweak and play rather than simply dial in a preset.

Inspiration is a priceless commodity, and Wolfram provides plenty of it.