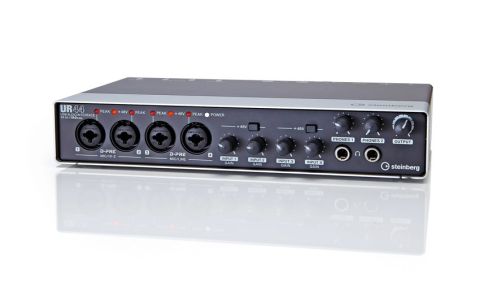 Since Steinberg became part of Yamaha its hardware has improved immeasurably, and the latest UR series interface is a case in point. The UR44 follows the well-trodden route of audio in/out (six and four respectively), MIDI in/out and headphones (two independent outs).

It's a solidly built, compact interface with all the useful stuff such as inputs, phantom power and headphones accessible on the front, and the more functional stuff such as outputs, MIDI and inputs five and six round the back.

Spec highlights include four Class-A D-PRE mic preamps, conversion at 24-bit and up to 192kHz, onboard DSP, and USB Class Compliant mode so you're ready to roll with an iPad.

The most interesting of these is the onboard DSP, which is put to use in a number of ways. Firstly, it runs the bundled dspMixFx application, which handles zero latency monitoring. However, it also powers plug-ins within this application, including four guitar amp simulations (Guitar Amp Classics), a combined channel style compressor/EQ (Sweet Spot Morphing Channel Strip), and an algorithmic reverb (REV-X).

The major benefit of this is both the guitar amps and channel strip can be used either as real time inserts and printed with the recorded signal, or simply for monitoring purposes while you're recording. All three DSP processors are also available as VST3 plug-ins, so you can replicate your real time monitoring settings within your DAW with native plug-ins.

So far, so good. But the UR44 really comes into its own when coupled with Cubase, as it's supported by Steinberg's True Integrated Monitoring system. This means you can ignore the dspMixFx application, as all its functionality is embedded directly within Cubase.

How does this stack up in practice? The front end is nice and clean with plenty of mic gain (+52dB max). The first two inputs can also handle high impedance instrument jacks. Within the dspMixFx application there's also phase reverse and high pass filter, with user selectable global filter setting (40 to 120Hz).

The dspMixFx application provides two separate zero latency monitor mixes combining the DAW output with the hardware inputs. There are limitations with this, such as the second mix can only feed Phones 2. Plus you are sharing the one REV-X between both. But the biggest limitation is the DSP allocation for the effects. We managed one amp plus two mono channel strips or four mono channel strips. Alas, two simultaneous amps is not possible.

So, that leaves the Sweet Spot Morphing Channel Strip. You can use this as an EQ and compressor. However, it also includes a 'one knob' Morph control that shifts between various compressor/EQ settings combinations. This is defined by a few Sweet Spot data presets and these are great for quick set up, or for just discovering settings one might not normally choose.

To access all this functionality in Cubase you activate the 'hardware' rack in the Cubase MixConsole. The rack includes a signal flow style layout, which you can modify to match the three processing options (bypass, monitor and insert). You'll also find a level control that works with Cubase's Direct Monitoring.

It may seem strange to spend so much time on the bundled extras, but it's the DSP hybrid design that takes a well-designed interface and gives it an extra boost. However, you're also getting an interface compact enough to stick in your bag. Overall a big thumbs up.