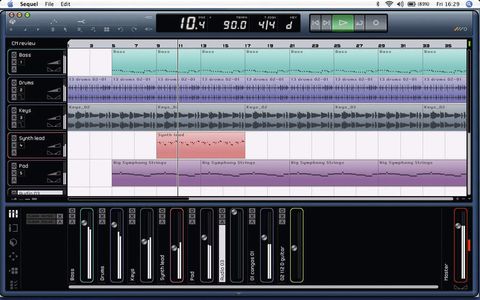 On the one hand, there were the simple sample arrangement programs that looked more like video games than they did DAWs, while on the other you´d find cutdown versions of established DAWs (the likes of Cubasis, MicroLogic and Cakewalk Home Studio).

GarageBand, though, was and remains different. On one level, it´s a loop arrangement program, but it also features its own software instruments, plug-in support and the facility to record audio. What´s more, it boasts a simple, friendly interface; rather than simply produce a feature-light version of Logic, Apple have given us a new type of program that doesn´t intimidate beginners.

This, funnily enough, is precisely what Steinberg are promising with Sequel. Despite what its name might lead you to suspect, this is a brand new app that´s being targeted at people to whom the Cubase brand means nothing. Although it borrows some of its features from Steinberg´s most famous DAW, it´s an original rather than a derivative.

Sequel ships on a single DVD that contains both the main application and all the bundled content. Some 5000 loops are included (these cover all manner of stylistic bases), though you have to register the software before you can access 500 of these. You also get in excess of 600 playable software instruments.

Installation on the Mac ran perfectly first time, although, slightly alarmingly, we couldn´t actually get Sequel to work on either of the PCs we tried it on. The problem lay with the Syncrosoft ‘Soft-eLicenser´ - this is designed to enable you to download your software license to your hard disk, but every time we tried to do this, the utility asked us to plug in a USB dongle. Steinberg tell us that this will only occur in a small number of cases - and that a new version of the Syncrosoft software will resolve the issue - but we´re obliged to mention it.

Although not quite as inviting as GarageBand´s, the Sequel interface is refreshingly easy to get to grips with. Project management tools are located at the top of the screen, as are the transport controls. What you won´t find are lots of menus - Sequel is very much a one-screen affair, so all of its features are just a click or two away.

The Arrange Zone sits in the centre of the screen, and this is the portion of the GUI that most closely resembles a traditional DAW. Tracks are listed down the left-hand side, while recorded parts scroll off to the right.

Below this you´ll find the Multi Zone - so called because its appearance changes depending on which of its left-hand-side tabs is clicked. These give access to the Mixer, the

selected track´s ‘Inspector´ (which is where effects are applied), the Media Bay (loops are accessed from here), the Editor (for both audio and MIDI), the Arranger (see Chopping and changing boxout for more on this) and the Program Settings window. This might sound like a lot to have to flick through, but finding the page you need quickly becomes second nature.

So, what´s Sequel like to work with? Pretty good, it has to be said. It´s a testament to its ease of use that we managed to create a complete track within about an hour of firing it up for the very first time, with little reference to the manual. The Media Bay makes finding suitable loops simple (you can narrow down your searches using keywords), and choosing an instrument is similarly speedy. Audio recording, too, can be mastered quickly: just create a suitable track, choose your input and you´re ready to go (24-bit/44.1kHz is the maximum resolution). There are even a few ‘power´ features - audio warping/quantisation and automation, for example.

It´s also pleasing to report that Sequel enables you to make music that sounds genuinely professional. Predictably, the loops are of variable quality (they automatically fit to the current tempo and key), but anyone who wants to put a reasonable groove together quickly will be able to do so. The general purpose instruments are more than acceptable too, as are the effects, each of which comes with a good selection of presets.

All of which leaves us with a package that will certainly appeal to beginners and is a useful scratchpad application for kicking songs off in (Steinberg are planning to add a ‘Sequel project import´ feature to Cubase 4, incidentally). However, there´s no doubt that Sequel would benefit from plug-in support.

Steinberg reason, with some justification, that the beginners who buy the software won´t even know what plug-ins are, but they´re sure to discover them eventually, and when they do, they´ll be disappointed to learn that their otherwise well-specified music app can´t host them. Despite this limitation, though, Sequel is a strong product - and one that Steinberg needed to release. They´ve always had the high end of the music software market covered, and they´re now in a position to challenge at the entry level, too.