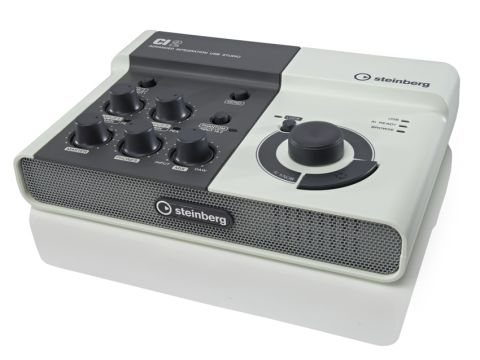 This is a great package, and offers the user almost all they need to get started with DAW production.

Just over a year ago Steinberg introduced three new items of hardware - the CC121 Advanced Integration Controller and the MR816CSX Advanced Integration DSP Studio, plus its MR816X variant. Now we take delivery of what is a distillation of both ideas but at an entry-level price point.

The CI2 is essentially a 2-in/2-out USB audio interface and basic DAW controller bundled with a cutdown version of Cubase 5 (Cubase AI5). Like its siblings, the CI2 is designed and manufactured by Yamaha, Steinberg's parent company, and therefore brings with it a considerable design heritage.

Open the box and you'll find a plastic-cased box in grey and off-white that sports a series of knobs and buttons on the top panel with all sockets round the back. It's quite weighty and there are some signs of some serious metalwork underneath, which bodes well in noise and robustness terms. On the bottom the unit has threaded holes for mounting on a stand or rack.

Starting with the connectivity we get the obligatory USB socket - in this case, it's of the USB 1.1 variety, rather than the higher-bandwidth 2.0 version, but with only four audio streams in this case it isn't an issue.

Next we have a foot switch for remote control, which duplicates operation of the front-panel Action Pad button (more on this later), and a standard 1/4"-inch headphone socket. Output is handled by two balanced (TRS) jack sockets (1/4-inch again) that will also accept standard unbalanced (TR) plugs.

"The C12 is quite weighty and there are some signs of some serious metalwork underneath, which bodes well in noise and robustness terms."

Finally, the inputs are on a pair of XLR/1/4-inch combo sockets for handling balanced and unbalanced mic and line level sources. Input 1 also facilitates the Hi-Z (High Impedance) output from guitars via a front panel switch.

On the front panel you'll find separate controls for the master volume (the main output level, which doesn't alter what is being recorded), phones level, and input/DAW mix control for latency free monitoring. There are two input gain controls, each with a peak LED, and buttons for mono monitoring of input sources and phantom power.

The CI2 can be used as a conventional audio interface, but only lives up to its Advanced Integration moniker when used with Cubase 5 or the enclosed Cubase AI 5. This then allows you to use the AI knob for parameter control and various project and menu selection tasks (albeit only with fully compliant software and plug-ins).

The Action Pad is essentially a configurable switch that is designed to make recording as mouse-free as possible. These are nice extras in our book and work well with the enclosed software tools.

The inclusion of Cubase AI5 is not to be sniffed at, as what you are getting is a cutdown (and upgradable), but still feature-rich version of Cubase 5.

While the CI2 is not the cheapest audio interfacing solution out there and we would like to have seen MIDI included, it is well made, well thought-out and comes bundled with great software, making it well worth a look.