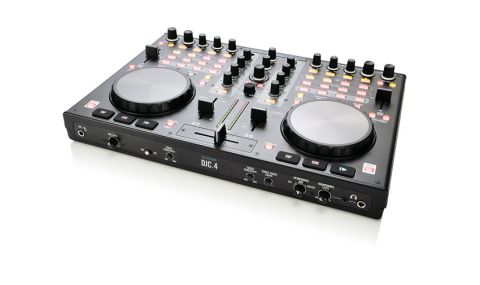 The perfect partner for Virtual DJ users, and a great feature-packed option for entry-level controller DJs.

Check out Stanton's DJC.4 and you might think you're dreaming. A two-channel, four-deck DJ controller, teaming with brightly lit buttons, functions and features, bundled with the Virtual DJ LE software, all for £299?

After booting it up and watching the wealth of buttons ripple with a lightshow, you're hit with how much you have to play with. A quick count clocks up 95 assignable MIDI controllers - and then you can double functionality by activating the shift buttons.

Some might say it could baffle the entry-level consumer. It certainly did with us, and this writer has 20 years in the game. Still, you normally find that once you've bought something like this you're going to master it pretty soon. Time will tell.

We're running the DJC.4 through its paces with the Virtual DJ LE it comes with, although you can MIDI-map it to other software, such as Traktor. Boot up the installation disc (and a quick driver on Windows) and you're up and running.

In the mix, the EQ kills do 100% of what they say on the tin. The scratch mode offers some nifty jog wheel response - although nowhere near perfect for scratching - and the hot cues, loop function and sample banks provide hours of creative DJing on the fly and loads of choice for spicing up your mixing. Every dial feels built to last, too. The tempo sliders could offer more range. If you're coming from old-fashioned turntables, it might take a while to get a precise lock in tempos.

Scratch DJs will take issue at the latency issues with the platters (128 steps per rotation), and the slightly lacking biting point on the replaceable 100K cycle, 45mm crossfader (no reverse either, hamster fans).

It's not aimed so much at that crowd, anyway. Controllerists would do well to opt for the Numark NS7 DJ controller if they're scratch-happy DJs. Those of you that really break down a loop or break will find it perfectly serviceable, but not quite a market leader there either.

Still, if you fancy yourself as a bit of a mix-master, then DJC.4 does have a trick up its sleeve. Although it appears to be a two-deck controller, you can actually mix up to four virtual decks on this device at the flick of a switch.

It does beg the question, though: why? What entry-level controller DJ is going to want to be that complex when playing out? If four-deck controller mixing is your bread and butter then head for the Reloop Terminal Mix 4 - it does the job far better.

Other possible gripes could be a frustration at a lack of booth monitoring - that might jar with DJs reliant on this in clubs. The biggest gripe of all, however, is that it can't be used as a standalone mixer.

Like all light versions, Virtual DJ LE doesn't come with the punch of the full upgrade, but it's got all the basics. Both versions of Virtual DJ offer video DJing as an option on the DJC.4. It's a tad underwhelming in the LE version, but a perfect starting point for novice VJs.

So we've established that the DJC.4 is definitely not for scratchers. Dedicated Serato heads should try the Vestax VCI-300 or the Novation Twitch, while Traktor users should give the Kontrol S2 or Denon MC3000 a whirl.

That doesn't take away from the fact that the Stanton DJC.4 is a spiffingly well-designed controller, though. It makes a solid entry-level device, or backup system for more demanding digital DJs.